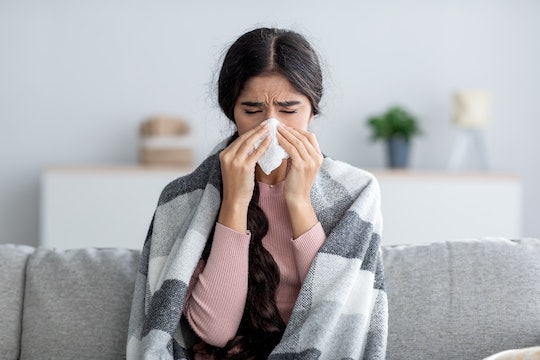 Here's What Catching A Cold After Ovulation Could Actually Mean

When I was trying to conceive (TTC), it got to the point where I was obsessing over every little symptom and hoping and praying it meant I was pregnant. I searched online for all of the bizarre pregnancy symptoms that could happen, so one September when I caught a random cold a week or so before I was supposed to start my period, of course I Googled, "Is a cold a sign of implantation?" Now hear me out before you judge, because as odd as it may sound, most of my friends told me they caught a random cold right before they found out they were pregnant. I found some information online with conflicting answers saying it does happen, and some that claimed it doesn’t. Since it turned out I was pregnant, I needed to know: Was my stuffy nose and sneezing an early sign of pregnancy?

Many experts believe that catching a cold or having flu-like symptoms right before getting a positive pregnancy test can be a sign of conception because of hormonal changes. Your membranes inside your nose are swelling from these hormones and causing increased mucus. “While not every woman will experience this, it affects enough women to have its own name: pregnancy rhinitis,” Sarah Wohlman, a certified midwife and nurse practitioner with Planned Parenthood of South, East, and North Florida, tells Romper. “Women have different early signs of pregnancy — some women feel very tired, some have decreased libidos, some are more emotional, others have cravings early on. A lot of those things are hormonal and will affect each woman in a different way.”

This theory is pretty well known, and it "certainly can be a symptom," Dr. Jamil Abdur-Rahman, OB-GYN, medical travel blogger, and one half of TwinDoctorsTV, tells Romper. Though nasal congestion isn’t the most common of early pregnancy symptoms, other common cold symptoms, including nausea and fatigue, are.

Roughly “20 to 30% of pregnant women develop symptoms of nasal congestion in pregnancy,” Dr. Alice Sutton, M.D., FACOG, assistant clinical professor of OB-GYN and reproductive science at UC San Diego, tells Romper. And if no other cause can be found, such as seasonal allergies, it’s likely pregnancy rhinitis. “The mucosa (lining) of the upper respiratory tract (including the nose) has increased blood flow during pregnancy which can cause the congestion symptoms,” she explains. “These symptoms can start in the first trimester, as hormone levels rise in response to pregnancy. I don’t think that the congestion would be present at the time of implantation, but certainly it could develop in the first trimester.”

Does pregnancy make you more susceptible to colds?

To top off those runny nose feelings, I also feel like I’ve had this cold my entire pregnancy. Apparently I'm not alone. “Your hormones cause you to produce more mucus when you are pregnant,” Glory Guerrero, also a nurse practitioner with Planned Parenthood of South, East and North Florida, explains. “Everyone is different — some women produce more mucus than others. It depends on your immune system and hormone levels. The amount of mucus produced will vary from one woman to the next.”

She also tells Romper that it can happen any time during your pregnancy, but it’s usually early on. “The hormones in your body are now producing extra saliva, [which] affects the amount and thickness of mucus in your membranes, so you may experience more congestion.” Not to mention, when you’re pregnant your immune system overall is weaker, making you more susceptible to a cold or flu.

“All in all, the lesson here is cold or flu-like symptoms are not necessarily a confirmation of a positive pregnancy test or a negative one,” Wohlman says. “If you experience these symptoms, either wait to see if you miss your period or if the discomfort is too high, go see your medical provider.”

So, symptoms of a common cold or flu don’t necessarily mean you’re pregnant. That being said, it could be an early sign, especially when paired alongside other common pregnancy symptoms like a missed period, breast tenderness, or vomiting. And if you’re really unsure and stressing about it, take a pregnancy test. Just remember that everyone’s symptoms differ when it comes to pregnancy. And now I don’t feel like such a looney for searching if cold symptoms were a sign of implantation.

More Like This
OB-GYNs Explain The Connection Between Stress & Miscarriage
Diastasis Recti Exercises You Can Do At Home To Heal Your Abdomen
What Foods Fight Nausea During Pregnancy?
14 Recipes For Sick Kids When Everyone's Tired Of Canned Soup & Crackers
What Parents Are Talking About — Delivered Straight To Your Inbox

This article was originally published on Jan. 19, 2018