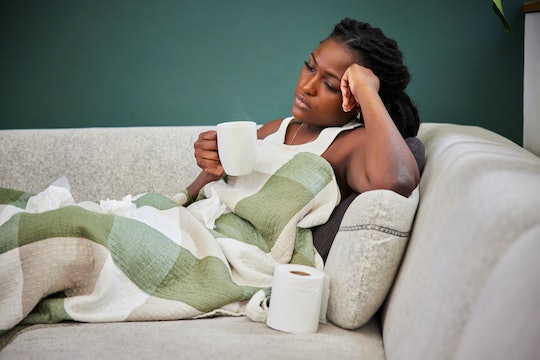 Is A Sudden Cold An Early Sign Of Pregnancy? Experts Explain

The symptoms can be similar.

I got the two worst colds of my life while I was pregnant. With my first pregnancy, I felt like doom the entire first trimester. Not only could I not eat, but I couldn't breathe through my nose, my head was throbbing, and I was sleepier than I'd ever been. It felt like I'd been hit with a semi-truck in the face. At the time, I chalked it up to an incredible run of bad luck in my pregnancy, unrelated to my baby. But then, I wondered if intense colds were a normal part of being pregnant.

Could a sudden cold be an early sign of pregnancy?

Catching a cold is pretty common, but if you're trying to get pregnant and are examining your symptoms, you might wonder if a really bad cold is a sign of pregnancy. As someone who's done the TTC thing for years at a time, I understand your irritation with anything that might throw off your pregnancy self-tarot-ing. (It's a thing.)

According to a study in Advances in Experimental Medical Biology, some pregnant people develop a condition called "allergic rhinitis" or "pregnancy-related rhinitis." While the exact cause remains unknown, allergic rhinitis happens when pregnancy hormones adversely affect the nasal passages. Symptoms of allergic rhinitis include a runny nose, sneezing, and congestion. When these are coupled with the other symptoms of early pregnancy, like fatigue and nausea, it can feel like a really bad cold, when it’s just the side effects of pregnancy for some of the population. According to a study in Clinical Practice, some pregnant people might also experience migraine or tension headaches related to pregnancy early in the first trimester, compounding the mimicry of cold symptoms.

As far as whether cold symptoms could be a sign of early pregnancy, it’s not a completely obvious answer. "It certainly could be, but it could just as easily be a false flag,” family nurse practitioner Sara Ledman tells Romper. She notes that while rhinitis is a very real thing, and pretty common, so are colds. "The common cold is common for a reason. It's really easy to get, and the severity of the strains vary widely."

"Rhinitis can happen at any point in the pregnancy, but the fatigue and headaches hit the ground running with the first drip of pregnancy hormones into your system," Ledman explains. She says not everyone gets the headaches, but almost everyone gets that bone-crushing fatigue of early pregnancy. Nice to know I'm not alone in my "can't do it, pregnancy is drawing me back beneath the covers" attitude I own for the first 12 weeks.

Differences between pregnancy and cold symptoms

Early symptoms of pregnancy can include a headache, a metallic taste in the mouth, fatigue, feeling lethargic, and a stuffy nose, which could be confusing signs of the common cold. “Since early pregnancy signs typically include missing a period, nausea, breast tenderness, and other longer-lasting symptoms, this can help in differentiating between pregnancy and the common cold,” Dr. Sherry Ross, OB-GYN, women’s sexual health expert and author of She-ology and The She-quel, tells Romper.

“During the first few weeks of pregnancy, many women experience a need to urinate frequently, extreme fatigue, constipation, heartburn, nausea or vomiting, fluid retention, mood swings, headaches, back pain, increased breast tenderness, and milky white vaginal discharge,” Ross says. “All of these symptoms can be normal and are expected in the beginning of new pregnancy as a result of normal hormonal changes.”

When you need to see a doctor

The only way to know if you're pregnant for certain is with a test, but if you know you are pregnant, it’s worth noting that your runny nose might not be going away any time soon. If you're feeling particularly bad, please see your provider.

"The symptoms of GERD (gastroesophageal reflux disease) can look like a sore throat, too, and many pregnant women get pretty dang awful GERD," Ledman says. GERD, a digestive disorder that causes reflux, is most common in the third trimester but can pop up at any time. If you get a fever or if you are feeling really run-down, it might be the flu, and it needs to be treated immediately, especially if you're pregnant. "Some colds come with a fever, but ... it needs to be addressed by a professional,” Ledman says.

As for relief, "anything that will open up your nasal passages is encouraged,” Ledman explains. “Oddly, the best treatment for fatigue and rhinitis I've seen is exercise." She says it might feel counterintuitive to work out when you're dog tired, but it gets your blood pumping and floods your system with endorphins. As for the headaches, Ledman says water should be your BFF. "Dehydration can make their symptoms much worse, making you feel like crap."

Exercising when I'm tired, and drinking something that isn't coffee or tea, isn't my idea of a good time, but I think I could swing it. Maybe you could, too.

More Like This
OB-GYNs Explain The Connection Between Stress & Miscarriage
What Foods Fight Nausea During Pregnancy?
Diastasis Recti Exercises You Can Do At Home To Heal Your Abdomen
58 Perfect Literary Boys Names
What Parents Are Talking About — Delivered Straight To Your Inbox

This article was originally published on Jan. 24, 2018