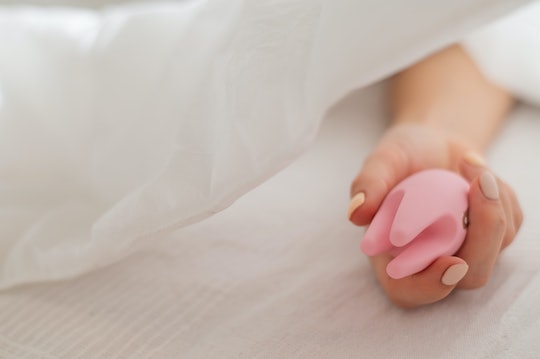 Everything You Need To Know About Sex Toys During Pregnancy

Just because you’re pregnant doesn’t mean that your sex life needs to go the way of the dodo. In fact, with all those hormones and the luscious, beautiful new curves you’re sporting, you might be feeling sexier than ever. But you might be worried that your go-to toys are no longer safe given your gestational condition, so I’m here to give you the comprehensive (and I mean comprehensive) guide to sex toys during pregnancy.

Sex toys and appliances have never been more popular, and more and more people are trying them out and adding them to their sexual reticule for a spicier experience. And yes, that definitely includes parents, even if their sex toys need to be a little quieter and more creative given the fact that the product of their activities could block the action at any time. With the vast array of toys available ranging from as vanilla as an ice cream cone to toys that look and act like they come from outer space, it’s hard to know just what you should or should not use during your pregnancy. I spoke with OB-GYN Dr. Adam Wolfberg physician-in-chief of Ovia Health and asked him about all the toys under the sun, what’s safe, what isn’t, and how it could affect a developing fetus.

The good news up front: sex in general is safe during pregnancy unless your doctor says otherwise, and your baby isn’t going to be hurt by sex during pregnancy. In fact, they might just fall asleep in your uterus, all snug and cozy, as you have fun.

Are Sex Toys Safe During Pregnancy?

Dr. Wolfberg says that, overwhelmingly, most toys are safe to use during pregnancy. “Sex and the use of sex toys are safe and healthy during pregnancy. Unless your doctor has told you otherwise, you are good to go.” And that includes penetrative sex toys, no matter the material. These can be used safely during pregnancy, provided it’s a normal pregnancy and you’re not at risk for preterm labor, says Wolfberg. Glass, silicone, and stainless steel are all OK to use, as long as you aren’t hurting yourself, and as long as it is consensual and clean. (Always clean your sex toys, friends.)

Are Vibrators Safe To Use During Pregnancy?

They most certainly are, says Wolfberg. In fact, vibrators are some of the safer toys you can play with because you don’t necessarily need to insert them into your vagina to experience pleasure from them. Your Hitachi, your Womanizer, your WeVibe, your Egg, are all great ideas during pregnancy, and a mighty fine way to pass the time.

Wolfberg says in spite of what you might have heard, orgasms do not cause preterm labor in women. And, depressingly enough for the women at the end of their pregnancy hoping to evict the little womb dweller by squeezing them out during some playtime, that doesn’t work either. You can’t climax your way to delivery. “Although, by all means,” Wolfberg says, “you can try.”

The only time you want to worry about clitoral play or vibrators is if you are prone to urinary tract infections, says Wolfberg, because those can be more serious during pregnancy. The same rule applies to humping toys. Keep everything super clean, keep yourself hydrated and monitored, and talk to your OB-GYN.

Yep, those are OK, too. While you have probably heard that nipple stimulation can lead to early labor, it’s just not really the case, says Wolfberg. In fact, he tells Romper that they can actually perform a test called the Oxytocin Challenge test that helps check on the fetus, where they stimulate a contraction through administering oxytocin to the mother. One less common way to perform this test is by having the mother’s partner stimulate the mother’s nipples for a period of time. And it does not start labor.

But — and this is a big but — your nipples may be more sensitive during pregnancy, so your threshold for pain might not be as high as it once was. That means those clamps or cups that hurt oh-so-good before you got pregnant may now feel like too much. But, there’s only one way to find out. (And don’t panic if your breasts start leaking during all of that nipple play and sex. It’s normal.)

Now, if you’re into a lot of kinky stuff, the safety guidelines get a little murky. Because there’s so little data on many of the fetish toys on the market, doctors can’t make a judgement one way or the other. For instance, electrostim toys, popular in the kink community, are not a known quantity to Wolfberg or the medical literature, so there’s no way to know if they are safe. Those toys emit gentle, but very noticeable electrical impulses not unlike a static shock. While not meant to be used internally, and generally considered safe by most, they’re just too new to have data.

The bottom line: sex toys are a great time, and mostly safe during pregnancy. Talk to your OB-GYN, be open with them. They will tell you what is safe for you. If they judge you or you feel disrespected, that’s on them, and if you can, you hould switch to a provider who makes you more comfortable.

More Like This
When Does Pregnancy Horniness Kick In?
How Long Does It Take For Sperm To Induce Labor?
How To Talk To Your Partner About Wanting A Baby
Barre Could Be The Low-Impact Prenatal Workout You Need