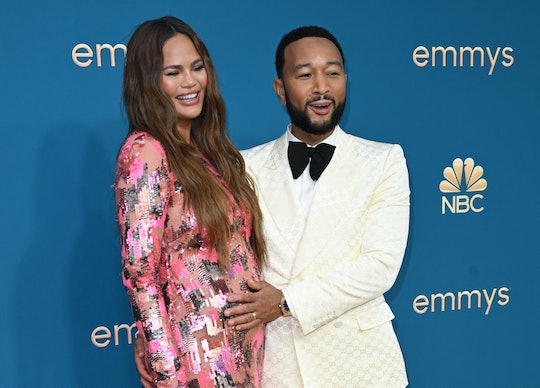 What Is Acid Reflux Tape? Chrissy Teigen Swears By It

Don’t put away the Tums yet, though.

As the host of a TV food competition and a cookbook author, is it any surprise Chrissy Teigen has her fair share of pregnancy cravings? But when you have acid reflux during pregnancy, it can put a real damper on eating anything at all. Teigen recently shared a nude photo to her Instagram Story showing off her acid reflux tape, which she says her chiropractor uses to reduce her reflux.

In her photo, Teigen stands nude in front of a mirror with a piece of black tape adhered across the top of her belly. She tagged Dr. Elliot Berlin, an LA-based prenatal chiropractor, thanking him for showing her the technique. In an interview with Romper, the model and author shared that her experience with acid reflux is preventing her from fully enjoying her fave foods while pregnant.

“I'm that person that they make [food] commercials for. Like, ‘I need to have that and I need to have it now,’” Teigen said. “I think right now the only thing stopping me is my own esophagus and acid reflux and stuff.”

So, is acid reflux tape a thing? Does it really work, or should you just keep pounding Tums until baby comes?

What is acid reflux tape in pregnancy?

Teigen’s so-called acid reflux tape is actually a strip of kinesiology tape, a therapeutic tape that you’ll often see on athletes’ bodies or in a physical therapy office. It’s available at most major pharmacies, and is commonly used to treat minor injuries and provide support to muscles and ligaments that need it.

Some pregnant people will use kinesiology tape underneath their baby bump to help alleviate strain on their lower backs.

Chrissy Teigen says yes. OB-GYNs don’t seem to have heard of using it this way, though.

She explained that kinesiology tape is something chiropractors use often, but using it to treat acid reflux only has “theoretical” benefits.

How to treat acid reflux at home

Schaumberg couldn’t necessarily recommend the tape approach, but says there are plenty of ways to relieve the burn of acid reflux during pregnancy.

“I suggest trying to avoid highly acidic foods, such as spicy foods, tomatoes, and citrus fruits,” she says. “However, since acid reflux in pregnancy is mostly related to the increased compression on the stomach from the growing uterus, dietary changes often don't make much of a difference for long. I recommend going for a walk after eating a meal to promote digestion, and avoiding lying down shortly after eating.”

Schaumberg recommends over-the-counter antacids like Tums for mild symptoms, and longer-acting medications like Pepcid if Tums aren’t taking care of business. If you’re still not getting any relief, talk to your provider — there are prescription medications that can help.

So, while Teigen’s doctor may be on to something new, there’s not a lot of evidence to explain why acid reflux tape works or doesn’t. It can’t hurt to try it, but keep the Tums handy, just in case.

More Like This
What Foods Fight Nausea During Pregnancy?
OB-GYNs Explain The Connection Between Stress & Miscarriage
Diastasis Recti Exercises You Can Do At Home To Heal Your Abdomen
30 EXtraordinary Girl Names That Begin With X
What Parents Are Talking About — Delivered Straight To Your Inbox