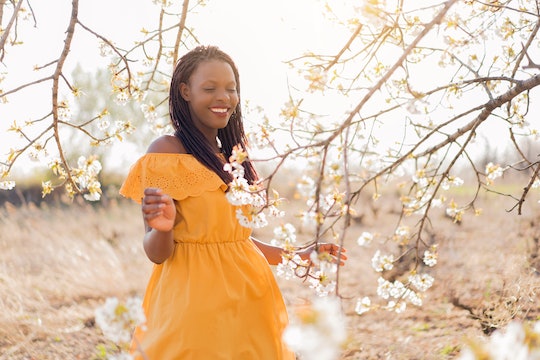 Pregnant In College: What It Was Like To Have A Baby My Senior Year

With laser focus and lots of support, I managed to graduate on time, with highest honors

In the spring of 2003 I was 21, a college junior, and pregnant. It was unplanned. After sharing the consequential news with a childhood friend, her question encapsulated how everyone else would react: "What are you going to do?” But unlike many other young women in my situation, I was ecstatic.

The same factors that impede college-aged pregnant women from completing undergraduate degrees affected me, too, but I was armed with a tremendous support system and a naivete about how my life would change. In retrospect it was that naivete that enabled me to have a single-minded focus on making it work. And it did work: I graduated on time and with first class honors. This, I now know, is not the norm.

According to WiscAid, the Wisconsin Financial Aid Study, in 2008, 23% of female undergraduates had at least one child, yet less than 1 in 10 completed their bachelor’s degree within six years of college entry. The main factor is that many colleges do not provide the necessary support for pregnancy. There is a lot of outreach regarding birth control and preventing STDs, but almost nothing about support during pregnancy. Childcare services are all but non-existent and on campus living is often not allowed for liability reasons. I know this from firsthand experience: I had to move off campus my junior year.

I was pursuing a hospitality management degree with a major in food service management. Navigating a garde manger course while dealing with morning sickness or standing for six hours during an international cuisine class at eight months pregnant was physically hard and emotionally draining. I spent that year constantly vomiting and feeling nauseous while preparing for finals.

Being a pregnant college student in a Caribbean country for me presented additional challenges. Jamaica is known to be the country that has the most churches per square mile and has deeply entrenched moral codes. At that time in Jamaica, teachers’ colleges encouraged unwed mothers to discontinue studies, but thankfully this was not the policy at my institution. I have to give my college faculty credit as I was never made to feel unwelcome.

The prospect of motherhood made me so happy that it was impossible to shame me about not being married.

The disappointment of me being unmarried and pregnant at 21 was quietly voiced by some people behind my back, but my unbridled tongue was legendary enough that these people were never brave enough to express their opinions in person. Plus, the prospect of motherhood made me so happy that it was impossible to shame me about not being married.

I started senior year seven months pregnant. My entire focus was on completing my degree — even without knowing the empirical data about degree completion for college-aged women, I was convinced it was a now-or-never situation. This was my chance.

At any age, having children without a support system can be difficult. What matters most is how the woman feels about the pregnancy herself, and the availability of resources to support her, which, In a perfect world, would have nothing to do with age. And my emotional support team was amazing. Lecturers would give us class breaks so I could eat between sessions. Friends made sure their bathrooms were always clean so that I had a nice place to throw up. And family members tended to my every need — from driving me to class to tending to my cravings, it was always covered. My friends even threw me a baby shower, despite the fact that all of them, at the time, were unemployed.

I am now on the cusp of 40, preparing to send my firstborn off to college in England this fall. I have friends at all stages of the parenting spectrum, from newborn to middle school, but I'm the only one with a high school senior. Having children later on in life does seem to have its perks (financial stability, mostly), but no one escapes the late-night feedings, colicky babies, and potty training.

I think often of my dad, who sadly died before my son’s third birthday. One week after delivery, my dad drove me to school for a required assessment: a test for our international cuisine course in the school's restaurant that took place late at night, when the dining hall was empty. He waited until almost midnight in the parking lot, and then drove me home. We lived 60 miles from school. Daddy made all the difference.

For me, I am reveling in the prospect of becoming an empty nester at 45 and enjoying my next stage in life, while remembering fondly all the persons who made those early days of motherhood possible.