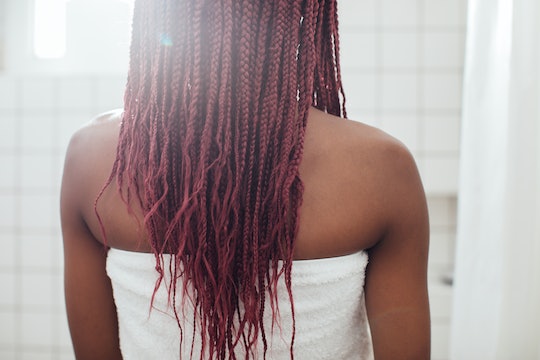 Here’s what to know before taking a soak.

The morning you get home after giving birth via Cesarean section, there is no doubt that you will feel grody in a way that a hot shower in the hospital will simply be unable to fix. In the haze of new feedings and much-needed naps, you might desperately want to soak in the tub and relax, but the truth is, it won’t be safe to do so quite yet. People who just gave birth via C-section must wait until they are healed before taking a bath — but how long, exactly, should that wait be?

When it comes to safely taking a bath for the first time after having a C-section, there is no one timeline that will apply to everyone. “It's going to be case-by-case because not all C-sections are going to be exactly the same,” Phoenix-based OB-GYN and women’s health educator Dr. Ali Rodriguez, M.D., tells Romper, “and obviously, every patient is different.” That being said, there are some general guidelines to follow — but the most important thing is to listen to what your doctor says is right for you and your healing body.

So, before you hop in the tub for some much needed relaxation after your C-section surgery, make sure you’re following what the doctor ordered and doing it safely. Romper spoke with medical experts to help break down when and how it’s safe to take a bath after a C-section.

When can you take a bath after a C-section?

In terms of bathing, postpartum showers are OK to take as soon as you are feeling strong enough to stand. For baths, though, you’ll have to wait a bit longer before filling up the tub. "In general, two weeks [after surgery] is a good marker for when it's likely safe to submerge your healing wound in bath water," Dr. Jennifer Conti, M.D., a practicing OB-GYN and clinical assistant professor of obstetrics and gynecology at Stanford University, tells Romper.

This time frame also applies to those who gave birth vaginally. Submerging the vagina and the incision site in non-sterile water any earlier can put new parents at risk for infection. "With vaginal deliveries, as well as C-sections, the cervix, usually closed tightly during most of pregnancy and when not pregnant, provides a potent barrier against infection in the uterus by its water-tight design," Dr. Wayne Furr, M.D., a board-certified OB-GYN practicing at Lone Tree OB-GYN & Midwives in Denver, tells Romper. "If the protector (the cervix) has been opened or dilated, its protective abilities have been compromised.”

Besides safeguarding against introducing bacteria to the uterus, holding off on that soak helps keep the danger of a skin infection at bay. "The biggest concern with soaking a larger incision like a C-section wound is making sure the skin layer has healed over to prevent skin infection," says Conti. She tells Romper that new parents are fine to take a soak after that.

While the two-week mark is a rough estimate for when you can return to baths, keep in mind that every body heals differently, and it could take longer for the skin to be ready for a safe soak. “The healing time as far as for the skin to come back together and heal well after being sutured is typically about two weeks, but your doctor will explicitly tell you if you are cleared or not when you do your first visit with them,” says Rodriguez. In fact, MedlinePlus, a health resource produced by the U.S. National Library of Medicine, suggests that a bath might not be safe for three weeks after surgery. Talk to your provider to get the green light before hopping in the tub.

When it’s not safe to bathe after a C-section

In addition to safeguarding against introducing bacteria to the uterus, holding off on that soak helps keep the danger of a skin infection at bay. "The biggest concern with soaking a larger incision like a C-section wound is making sure the skin layer has healed over to prevent skin infection," says Conti. She tells Romper that new parents are fine to take a soak after that. However, if you do have an infection or symptoms you think might be signs of an infection, steer clear of the bathtub.

Every day after your C-section, you incision should get better and better. However, if you experience increased pain or bleeding, then it’s definitely not safe to bathe. “In that one- to two-week mark, when we see things go wrong is when patients are suddenly having excruciating pain along their incision, they have a fever, [or] there’s more bleeding from the incision,” Dr. Cheruba Prabakar, M.D., a board-certified OB-GYN, tells Romper. “Those are red flags that you want to go and see your doctor before the two weeks [is up].”

How to bathe safely

Once you are cleared to use a bath, there are some precautions and best practices to keep in mind so that you do so safely. When you return to the tub again for the first time, Rodriguez recommends testing the waters — literally. “I would limit your bath time to no more than 20 minutes if it's your first time,” she says, “just to make sure that you know everything's going well.” Additionally, after patients get approval from their doctor to take a bath postpartum, Furr says they should not scrub or rub the C-section incision, even after the annoying, lint-collecting adhesive strips used to keep the gauze in place are gone.

"The Steri-Strips are meant to stay on for several days and even up to a week,” Conti tells Romper. “The general rule of thumb is that when they start to fray and lift at the edges, they are fine to come off entirely," Conti tells Romper. After they come off, proceed carefully when touching your scar. “Once the skin has healed over, vitamin E oil or soothing ointments like Aquaphor can feel nice on any dry, itchy skin,” she says.

It’s also best to avoid products such as bath bombs, bubbles, or anything with lots of fragrance, according to Rodriguez. “At that point, you don't want to get an infection because you are still healing from the C-section,” she says. “Try to use very sensitive-skin-friendly bath products.”

Additionally, hemorrhoids (those painful, itchy swollen veins in the anus) are another reason you might be interested in a warm bath in the early postpartum weeks after a C-section, but there are some special steps to take. Furr says those seeking relief from hemorrhoid pain can sit in a shallow herbal soak called a Sitz bath, using two to three inches of water in a tub or basin. "Although warm water is usually preferred, cold water is better for pain reduction," says Furr.

The good news is that between recovering from surgery and getting acclimated to life with an infant, those postpartum weeks will likely fly by. Before you realize, it will be OK to safely resume many of the activities you were doing before your C-section — including indulging in a decadent bubble bath.

This article was originally published on Aug. 20, 2019