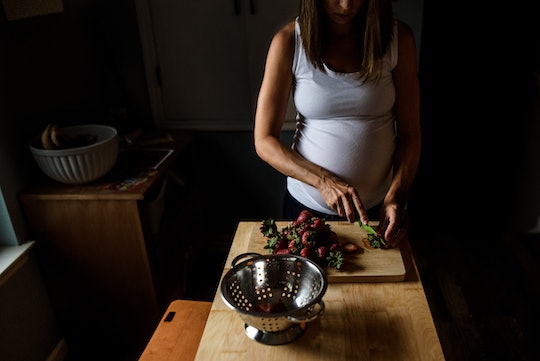 It might totally freak you out, but it's totally normal.

Before having children, I naively assumed the only thing to really change about a woman's body during pregnancy was the growth of her stomach. Ignorance is bliss, right? But now, after three pregnancies, I've seen my body do a lot. So if this is your first baby, you're probably feeling the same confusion about the phenomenon that is your now-ample breasts producing milk — and might be considering some nursing pads. But when do you start leaking breast milk during pregnancy? It can help to feel prepared, because when you suddenly nap and wake up with wet spots, it's quite a shock.

During pregnancy, the hormonal fluctuations result in breast enlargement, increased blood flow, and the growth of your milk-producing glands, Dr. Kecia Gaither, OB-GYN and Director of Perinatal Services for NYC Health+Hospitals/Lincoln, tells Romper. This is all in preparation for breastfeeding once you deliver, and she says that in the late second trimester to early third trimester, you might notice some yellowish fluid coming from your breasts. “This is called colostrum, which is a nutrient-rich, immune-boosting fluid that your newborn will consume in the first few days after delivery," Gaither says.

Although it is atypical, leaking breasts can even begin as early as the first trimester, according to Patricia Evans, a nurse practitioner with Memorial Care in Orange County, California. “Most women will not experience it until later, if at all, but seeing some lactation in the first 12 weeks gestation is not cause for alarm. You should not try to pump colostrum during pregnancy, because it can cause contractions that send you into preterm labor."

Experts say that hand expression is safe to do after 37 weeks, however. Natalie Telyatnikov, founder of Better Postpartum, explains to Romper that at this point “colostrum harvesting” can be done to help supplement breastfeeding later. “Women can store small droppers of saved colostrum in bags in the freezer, and later defrost them in the refrigerator or at room temperature once the baby has arrived. This previously extracted colostrum can be used to give a mother's nipples a rest between feedings to help heal nipple damage, and a stored supply comes in handy if the baby has an improper latch and needs to be fed through syringes while learning how to feed from the breast." But don't panic if you don't harvest this colostrum, or if you don't even notice any leaking from your breasts. Everybody is different, and not seeing any breast milk now doesn't mean you won't successfully breastfeed later.

But if all goes well with your delivery, your baby will likely want to nurse pretty soon after birth, and the nurses or midwives present can coach you on proper positioning and getting a good latch. At this time, it is almost definitely colostrum that your baby will be getting. In fact, most women don't produce breast milk until two to three days after the baby is born. And despite what you might think due to the scant amount, this is no second class beverage. Colostrum is thick and nutrient-dense and has been hailed by some as "baby's first superfood," according to Parents.

The low volume of colostrum you produce might concern you, but it really is enough to nourish your baby in the beginning. Telyatnikov explains that on the day they are born, a baby's stomach can only hold a few milliliters of liquid. The stomach grows quickly, but even still, at 3 days old it's only the size of a marble, and by day five, a ping pong ball. Colostrum might not look like much, but it's not called "liquid gold" for nothing. And it's perfectly normal to see signs of it before you've even given birth. You don't have to do anything with it, just take in all the changes happening to your body.

More Like This
Is It Safe To Pump While Pregnant? Experts Weigh In
What Foods Fight Nausea During Pregnancy?
OB-GYNs Explain The Connection Between Stress & Miscarriage
Is Raspberry Leaf Tea Safe To Drink During Pregnancy?
What Parents Are Talking About — Delivered Straight To Your Inbox

This article was originally published on July 10, 2018