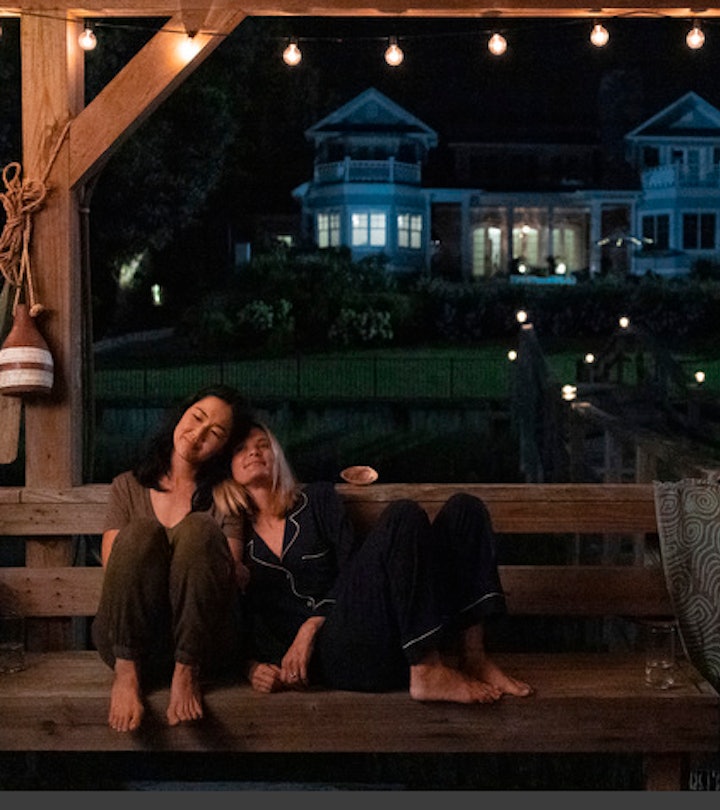 “It was important to me that each of the women had their own story that wasn't just being a mom to the kids, that they had something for themselves.”

Author-turned-filmmaker Jenny Han believes there's something very cathartic about watching a character wail on screen. She loves how, in Korean dramas, men as well as women really cry when the scenes call for it, helping to form an intimate bond with the audience. In Prime Video’s adaptation of her 2009 YA romance novel series, The Summer I Turned Pretty — a coming-of-age beach romance about Belly (played by newcomer Lola Tung) — Han encourages the actors to reach for that same level of intense emotional connection. The result is drama magic. I could not stop watching and devoured all 7 episodes at once. The Summer I Turned Pretty received the ultimate vote of confidence when it was renewed for a second season by its studio ahead of its premiere.

Han, who takes inspiration from Korean dramas — a genre with dedicated stans around the world — says, “To me, what makes Korean dramas so special is the emotions. [We can be watching] sobbing and then laughing so hard.”

The Summer I Turned Pretty follows Belly as she navigates a summer where everything changes as she is forced to choose between her first love and several other very worthy potential love interests. The series masterfully captures the related emotions of envy and heartbreak, but especially the yearning that I too felt so deeply as a teenager. Han’s signature female-centered narratives allow her characters to dwell in the drama and the earnestness unapologetically, which honestly feels refreshing. Reading or watching Han’s works is to revel in bittersweet adolescent transformation — in the beauty, romance, and the pain.

For many, Netflix’s hugely successful To All the Boys I Loved Before film trilogy starring Lana Candor might have been their meet-cute with Han’s particular brand of storytelling. Others, like me, were first captivated by Han’s bestselling debut novel Shug in 2006 about a 12-year-old who struggles to navigate responsibilities beyond her years. Though the protagonist of Shug was not Asian, the emotional core of the novel felt distinctly Korean to me, especially when it came to its characters’ fearlessness in showing their feelings in all aspects of their lives. This raw and colorful core, infused with a whole lot of style and charm, is what is so irresistible about all of Han’s works.

Reading or watching Han’s works is to revel in bittersweet adolescent transformation — in the beauty, romance, and the pain.

“Growing up the child of immigrants — where I had to help out in a lot of ways that other kids my age didn't — was a lot of what the story is about,” Han says of her first novel. She adds that this theme of having a burden on your shoulders to be more grown-up than you feel appears in all her works.

As a 40-year-old mom reading YA books and watching shows like The Summer I Turned Pretty, I recognize a lowkey mourning for the adolescence I did not have myself. Shows like Han’s, as well as PEN15 and Never Have I Ever by other strong Asian American creators, are healing as well as entertaining in different ways. I’m escaping to a “what might have been.” But also, in the lives of characters like Maya, Devi, Lara Jean, and Belly, I can process the humiliation, awkwardness, and mistakes of my own adolescence — while celebrating that those formative experiences are behind me.

In The Summer I Turned Pretty, audiences are drawn into a world of wealth and leisure with which I am altogether unfamiliar. The show provides a glimpse of a modern-day Southern debutante scene, adding an escapist, almost fantasy element, à la Bridgerton and Downton Abbey. By contrast, my teenage summers were spent mostly sweating behind the counter at our family’s Chinese takeout restaurant. Belly, the protagonist, and her brother (winningly portrayed by Sean Kaufman), only enter this high society through their association with their mother Laurel’s best friend. The deep friendship between Laurel (Jackie Chung) and Susannah (Rachel Blanchard) is foundational to the plot and adds another layer of appeal, in part because Blanchard played Cher in the TV series version of Clueless, a film that capstones my own ‘90s adolescence. Her presence, set to a killer soundtrack of nostalgic throwback covers, really hit the perfect notes, moving me back and forth through time as the mom I am today recalled the teenager I once was.

“I was really hoping that mothers and daughters would watch it together and hopefully both feel somewhat seen in terms of the stories that we're telling,” says Han. “Because [it] was important to me that each of the women had their own story that wasn't just being a mom to the kids, that they had something for themselves.”

The Summer I Turned Pretty achieves this in bounds by highlighting that romance, ambitions, and dreams continue to exist for these mothers beyond their role as parents.

Han gives viewers like me another gift. As a mom to a multiracial 8-year-old, I’m constantly wondering what their teenage years will be like. Shows like The Summer I Turned Pretty ease my anxiety. They remind me of what it was like to be that age and how hard it can be, but I’m comforted by the strong characters, and the diverse representation that many young adult shows today celebrate – from protagonists who represent multiracial backgrounds, to proudly queer main characters, like Jeremiah (one of Belly’s love interests).

“I was really hoping that mothers and daughters would watch it together and hopefully both feel somewhat seen in terms of the stories that we're telling.”

“As a grown woman now, I look back on my younger self and I feel like I was so hard on myself…” explains Han. “I think that all young people are beautiful, [but] you think ‘oh if only I was like this or that,’ and you don't realize that you don't have to be anything else but you. You are already beautiful and I truly hope that young people watching this would feel that and feel [beautiful] inside without other people telling them… [that] they could take pride in that and not feel embarrassed or ashamed to feel beautiful.”

Belly as a character embodies Han’s message. Her wisdom and self-assurance by the end of her story arc really makes me grateful that young people today will have a character like her to look up to — and really, to feel beautiful just as we are is a reminder all of us could use, no matter how old.

More Like This
If Serena Williams Can’t Have It All, Who Can?
The Morning Rush Is Parenting At Its Most Essential
Doja Cat’s Shaved Head Is Teaching Black Kids Hair Love
Eating Dinner With Your Family In Front Of The TV Is Good, Actually