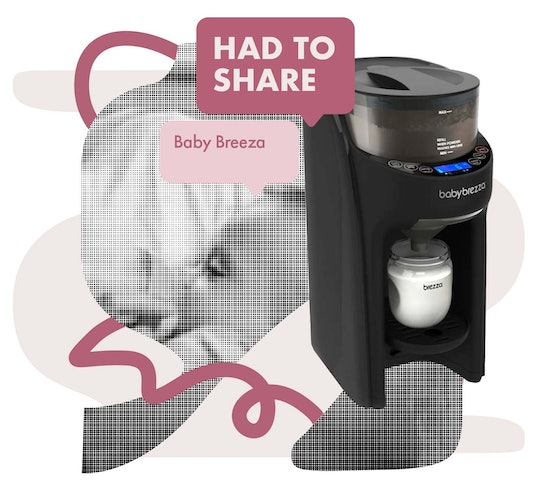 Babies are hard. This formula dispenser really does make it a little easier.

When I decided to stop breastfeeding my second child, I made the switch to formula fast. I was five weeks in and dealing with PMADs, and I needed a break. My husband and I Googled our way to a crash course in baby formula and — thanks to a tip from my Reddit ‘bumpers’ group — figured out right away that we needed a Baby Brezza. Because my husband does internet things for a living, he chose the Baby Brezza Formula Pro Advanced WiFi Baby Formula Dispenser. Mixing formula may seem like a thing you don't need a machine for, but the process quickly became unwieldy. While juggling a 3.5-year-old and a 6-week-old, all that round-the-clock measuring, scooping, and bottle-shaking got old, fast. I will always associate the arrival of the Baby Brezza (a few days after we ordered it) with the lovely feeling that life was becoming a little more manageable.

While it doesn’t quite feed the baby for you — and you probably wouldn’t really wish for that, anyway — it does take a lot of the hassle out of formula feeding.

What exactly is the Baby Brezza Formula Pro Advanced?

The Baby Brezza is like a Nespresso for babies, and it rocks — at least, that’s how I explain it to confused childless friends who eye the sleek, black, powder-loaded machine on my countertop. But seriously, it’s simply a machine that heats and dispenses perfectly-mixed bottles of formula in seconds. The Brezza has three temperature settings, so you can experiment with how warm the bottles should be. The smallest bottle it can make is 2 ounces, and it can go all the way up to 10 ounces, though we never made bottles that big.

How to use the Baby Brezza Formula Pro Advanced

When we had a newborn, we used the Brezza many times a day. For night feedings, I loved that I could just stumble downstairs and push a button without turning lights on or using my brain at all. Once you’ve figured out your formula setting — there are five settings based on every formula brand’s water-to-powder ratio, and you can check your specific formula’s setting on their website — and selected your water temperature, the machine is ready to roll. When it’s time to make a bottle, select the number of ounces, and press “start”. The machine makes a pleasant whirring sound and boom — bottle is ready.

What formulas can you use with Baby Brezza?

Almost every formula works with the Baby Brezza, including many formulas made outside of the U.S. We started using the Baby Brezza with Similac Pro-Sensitive, but we were still formula feeding when the formula shortage reared its ugly head and so we’ve used it with many different formulas in recent months. When you change formulas, you’ll just check your new formula’s setting on the Baby Brezza website and select that new setting. It just tells the machine how much the formula-to-water ratio should be for that specific formula type and brand.

How to clean a Baby Brezza

Funnels. It’s all about the funnels. The funnel is the piece of a Baby Brezza that, well, funnels the mixed powder and water into the bottle, and you’ll change them pretty frequently. Buy an extra funnel, or maybe two. We have three, and in the early days when we were going through so many little, 2-ounce bottles every day, I wished for more because the Baby Brezza Formula Pro makes you clean the funnel every fourth bottle. By the time we introduced solids, though, that churn slowed down and now that my daughter is over a year old, we often don’t change the funnel until she’s in bed for the night. You’re supposed to clean the formula tank once a month, and that has felt really manageable from day one.

Obviously, for me, the pros heavily outweigh the cons. But, if pressed, I can think of a few things that I wish worked a little differently about the Baby Brezza — and I definitely wish it weren’t so expensive. That said, if you consider the time, hassle and mental energy that it saves parents of newborn babies, I believe it’s completely worth the cost.

It’s probably really clear by now that I am borderline-obsessed with our Baby Brezza Formula Pro Advanced. If I had a zillion dollars, I would buy one for every formula-feeding family I meet. If you are pregnant, and you know you’ll be using formula, put a Formula Pro Advanced on your baby registry for sure. If you’re wealthy and your friend is formula feeding without a Brezza, do them a solid and buy them one. It earns its keep every day, all day — especially in the first six months, when solid food isn’t really in the picture. Anything that makes new parents’ lives easier is a total win, and this magical machine is just that.

The Baby Brezza is a genius, time-saving baby formula dispenser and is 1,000% worth it.

“Had To Share” highlights the products and finds that Romper editors and contributors love so much, we just had to share in the group chat.

More Like This
Review: The NooK Play Couch Turned Us Into A Fake Furniture Family
Cradle Cap Is Normal & So Is Your Desire To Get Rid Of It. Here’s How
Yes, The Jeep Wrangler Stroller Wagon Is Worth It
Gaelic Boy Names You Won’t Hear Every Day
What Parents Are Talking About — Delivered Straight To Your Inbox