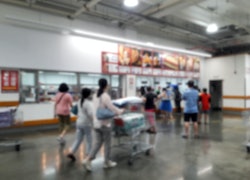 You can get delish deals if you plan ahead.

It doesn’t matter how much planning or prep that you do for a party. Inevitably, you will forget something, and it’s usually critically important to the success of your soiree (think adult beverages, for example). If your party is planned for our nation’s Independence Day — and you need to pick up a couple of those deliciously affordable rotisserie chickens — you’ll need to know: Is Costco open on the fourth of July? Because you might need to alter your arrangements.

If you’re planning to cruise on over to Costco on Independence Day for anything from patio furniture to dino chicken nuggets, you’ll probably find plenty of parking… in the form of an empty lot. That’s right, the warehouse giant is closed on fourth of July, according to the company’s site. Truth be told, Costco doesn’t close frequently — they’re open pretty much every day except for New Year’s Day, Easter Sunday, Memorial Day, Labor Day, Thanksgiving Day, and Christmas Day. That said, since fourth of July falls on a Monday, you could always go to Costco the day before, on a Sunday, when you’ll find the store open from 10:00 a.m. – 6:00 p.m.

Costco has some pretty yummy fourth of July deals. If you’re looking for something slightly different than burgers and dogs to go on the grill, Costco is offering $4.30 off Aidells All Natural Chicken & Apple Sausage (as well as the organic option, too) for a total cost of $13.69. For totally delish burgers that vegetarians will love, you can get the Impossible Plant-Based Burger Patties for $10.99 (a savings of $3.50). And because no burger should be without cheese, Kraft Singles American Cheese Slices are $10.19 for a whopping 96 slices. For a decadent dessert that doesn’t require you to turn on an oven, serve up some Haagen-Dazs Vanilla Milk Chocolate Almond Ice Cream Bars (15 count for $13.00)

But deals on party food aren’t the only thing you’ll find at Costco. Since laundry won’t wait (even on Independence Day), you’ll be able to do a load or two when you pick up Tide Ultra Concentrated HE Liquid Laundry Detergent for $24.49 (a savings of $5.50). And if you forgot to pick up plates (and now have a sink full of dishes to wash), the deal on Palmolive Ultra Strength Liquid Dish Soap ($7.19 for 102 fl oz) might make scrubbing all those plates a little more palatable.

Costco’s fourth of July 2022 hours don’t have to put a damper on your holiday plans. If you can get to the store over the weekend prior to fourth of July, you’ll find all kinds of amazing savings. And that way, you can enjoy Independence Day at home with the fam without having to wait on super long lines — even though those croissants kind of make it worth it.

More Like This
Tips For Growing Pumpkins This Fall
15 Costume Ideas For Mom, Dad, & Baby To Slay Their First Halloween
The Magic Mixies Magical Crystal Ball Will Be A Hot Holiday Toy
These Trio Costume Ideas Prove That The Best Things Come In Threes