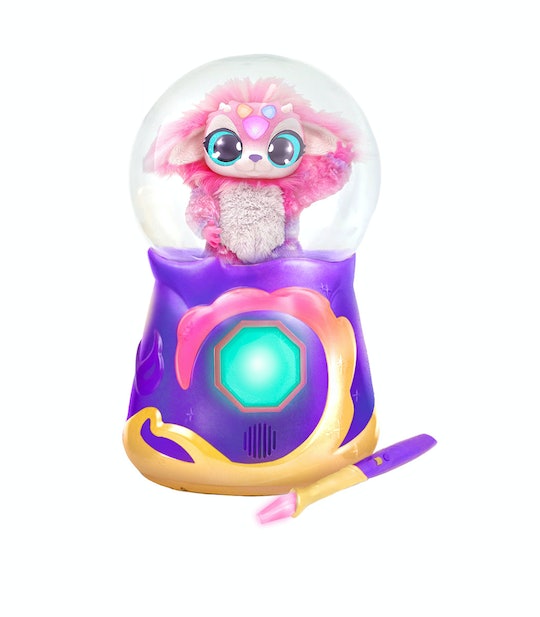 It’s like you smashed a Furby inside your Zoltar fortune-telling machine.

Combining the undeniable allure of unboxing toys and good, old-fashioned magic, the Magic Mixies brand is back this holiday season with a new product in their line-up of bright, interactive toys. The Magic Mixies Magical Crystal Ball follows the 2021 success of Magic Mixies Cauldron and promises to be just as popular and fun. Made for kids ages 5 to 8, this Magic Mixies toy is a crystal ball with more than 80 lights, sounds, and reactions. Using a spellcasting, interactive wand, kids just say a slew of magical words and watch as the crystal ball fills with a mist. When the mist clears, kids will find that they’ve conjured up their own plush Magic Mixie, giving it a voice, a color, fortune-telling powers, and more with a wave of their wand.

Once the Magic Mixie plush is fully created and pulled out of the crystal ball, play continues in four ways — fortune telling, spell, game, and tickling. (It’s basically a Furby mashed up with a Zoltar fortune-telling machine.) The Magic Mixie is like a plush Magic 8 Ball — kids can ask it questions, and its light will change colors to give an answer.

And if your child wants to make the Magic Mixie reappear out of the crystal ball as they play? Totally doable. Bonus: the crystal ball has a night-light mode, and overall, the toy isn’t that large if you’re looking for less stuff all over your house.

Retailing at $84.99, the Magic Mixies Magical Crystal Ball will be available in stores in October of this year, with pre-order beginning in September. Based on the popularity of the Magic Mixies Cauldron last year, the Magic Mixies Magical Crystal Ball is bound to be another huge hit. My own 8-year-old was super into this. (She also still 100% believes in magic.) For a kid who loves magic, mystical things (and plushes), the wand is a huge selling point. She was pretty excited to see the plush appear, and really loved talking to it and getting all of its little reactions. I kind of love how fun and bright the entire toy looks, especially sitting on her nightstand, and you just can’t beat a toy that encourages pretend play and works as decor. (Now, let’s hope my kid doesn’t see me asking her Magic Mixie for next week’s lottery numbers.)