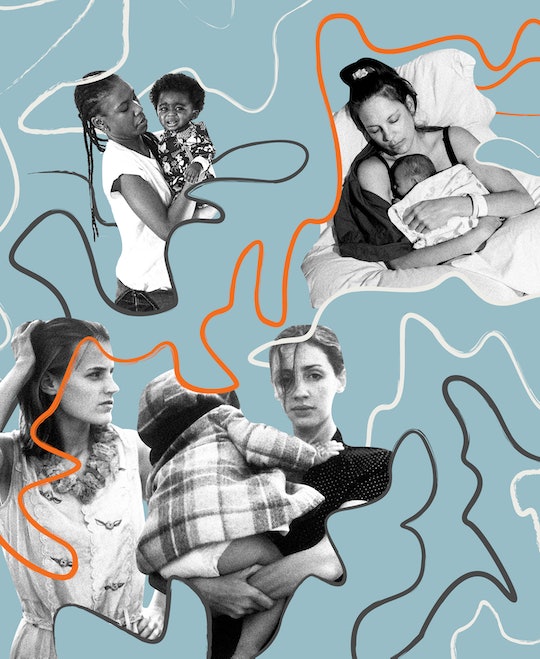 Something about experiencing this life-altering process at the same time meant we skipped past the awkward first hangouts and fell into things naturally and easily.

The first two months of postpartum life after my eldest child was born were devastating. Physically I felt betrayed by my body. From the agonizing pain of perineal stitches to the rollercoaster ride of my milk coming in, recovery from birth overshadowed everything positive I felt about having a baby. Everything I’d anticipated I’d do and feel because of Instagram (in retrospect: huge lol at past me) disappeared and was replaced by a persistent feeling that I was already doing everything wrong and fucking up being a mom.

Luckily this was not a permanent feeling, and once my hormones levelled out and I could sit down without the help of an inflatable rubber donut, my new circle of mom friends helped pull me out of my hole of despair. They sent me sitz baths and frozen pads. They brought food and magazines and recommended mindless shows that would get me through middle-of-the-night feeds. It takes a village— and Meredith Grey and Seattle Grace Hospital — to get a new mom through her first chapped nipple.

What’s always remarkable to me now that I have two kids is how easily and naturally these friendships were forged. At first we were disparate acquaintances, connected by modern threads of work, social media or our respective partners, but having babies around the same time pulled us into a shared experience that dropped all the usual pretenses around making adult friendships. Something about experiencing this life-altering process at the same time meant we skipped past the awkward first hangouts, testing our likenesses and trying on new friendships like a too-tight shoe. We fell into things naturally and easily.

It began with us congratulating each other on being pregnant, asking how far along we were, comparing notes on morning sickness (mine was brutal thank you for asking), and sharing tips on parenting books and birthing classes. Then we started texting more often, meeting up for rants on pregnancy insomnia and even attended each other’s baby showers.

And well as any new mom knows, it’s not a far stretch from that to texting each other at 1am to ask about diaper blowouts and sleep training. Motherhood can be such a lonely, isolating experience, especially the very first time you make the transition from a person to a person who is now responsible for keeping a weepy blob alive … forever. And as the babies turned into toddlers we supported each other through tantrums and daycare meltdowns and checked in on each other’s (yes often flailing) mental health.

What we collectively offer each other through these friendships is a lifeline and a reminder that, even if it feels like we’re being subsumed by a new identity, we were people before and through each other’s support we can feel like people again.

Especially as someone who is deeply Facebook mom-group averse, having a network of women I can send rash photos and unhinged rants to is necessary self-care. We don’t have to see each other every day or check in constantly but when we need each other it’s a given.

I try to extend this same support to any new mothers I know, to give them an outlet for their frustration, sadness and exhaustion. To let them know that the constructed image of motherhood may not reflect the reality. Why hold back honesty on the terror of that first postpartum poo (in this instance knowledge is absolutely power) or the rough ride of uterine shrinkage and the more accurate contours of the postpartum body. I try not to give advice, just an offer of closeness, an invitation to have someone sit beside you as you go through the tumult of motherhood for the very first time.

The performance of mothering will never match the unfiltered version and that’s okay. What we collectively offer each other through these friendships is a lifeline and a reminder that, even if it feels like we’re being subsumed by a new identity, we were people before and through each other’s support we can feel like people again.