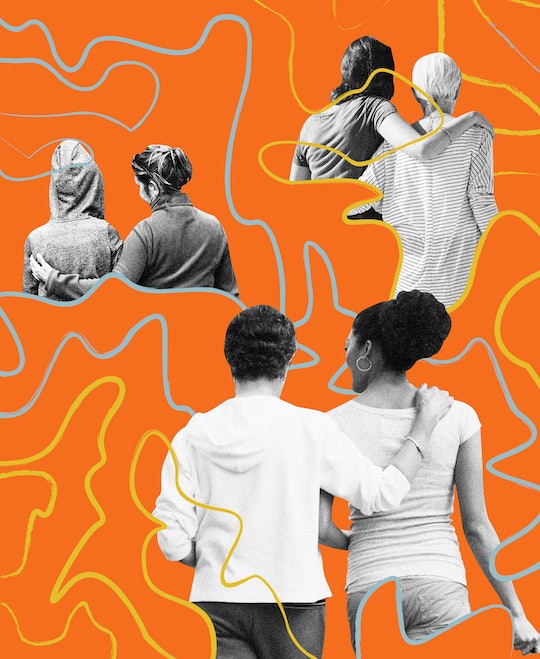 Jonathan told me I reminded him of his mother. Turns out, she and I were meant to be — we’ve been friends ever since.

by Joanna Hershon
May 5, 2021
Mother Figures

The first week of my freshman year in college, I knocked on the door of Jonathan’s dorm room. A friend in my hometown had told me to look out for him. I’d heard he was good-looking and that I’d like him, and when he opened the door, I saw there’d been no false advertising. We sat on his bed in his tiny single room and listened to music. His hair was shoulder-length like mine (this was 1990), he was 6’2” to my 5’10” and as his low voice wove a bit of a spell, I glanced around the tiny space with its tasteful tacked up postcards and the guitar perched in the corner, and everything felt exciting, if oddly familiar.

I’m not sure what I imagined might come next, but when he completed his thought, it set the tone for the rest of the evening, if not the rest of our lives:

You remind me so much of my mother.

She came to visit soon after. She and Jonathan’s rakish, much-older father took a group of us to dinner, and the rest — as they say — is history. Not Jonathan’s and my history (we’ve been effortless friends since meeting, but never anything more) but his mother’s and mine.

Our own mothers can never be everything to us. There's something about finding a friend of our mothers’ generation, who can help, if need be, to fill in the gaps.

The summer of Freshman year Jonathan and I drove to Wyoming with some friends to study Geology through our university, and lived in old mining cabins; Sophomore year we lived in houses across the street from each other. Our lives were always intertwined; our friendship was constant but never intense.

Jonathan was a Russian Studies major and after graduating, he moved to Kazakhstan (pre-Borat) for a mysterious job. I remember joking with friends that maybe he was a spy. I don’t remember the first time it happened but his mother invited me to their house, a train ride away from Manhattan, where I was scrambling to make a life. I came back for another lunch, then for a weekend, then for my first real Easter. I met my husband, Derek, somewhere in those first years after college, and he also hit it off with Jonathan’s parents.

I remember the thrill of watching Derek making both of them laugh. Sometimes we all kidded that I was Jonathan’s stand-in. His mother and I exchanged information about him, wondered about some of his choices, and marveled at others. In short, we missed him. But as the years passed, I felt closer to her. It says something about both of us, I suppose, that this never felt unusual. Jonathan was right; we’re similar.

I was brought up in a conservative, suburban Jewish household, culturally engaged but in no way artistic. I remember my own elegant, serious mother sitting on my bed when I was fifteen, looking at my walls and saying—with a touch of real fear: Are you going to become an eccentric?

I think of Jonathan’s mother as my fairy godmother or, when talking to my children, The Easter Fairy, as Derek and I have been going to their Easter celebration since long before they were born. My fairy godmother might have been my mother’s obvious opposite but she was not an eccentric (as it turns out neither am I); she did, however, offer an example of another way to live.

It’s a messier way than the way I grew up — think books coated with dust — and simpler: after Jonathan’s beloved father died, she realized she’d moved into his house as a young woman and hadn’t even thought to change a single, rustic cabinet. My own mother would have gutted that cottage down to the studs. The house isn’t grand by any measure, but it’s filled with exquisite paintings and etchings and a stately piano. Sunlight filters through skylights. There’s an ever-present musk of wood smoke. When I first came to visit at the age of 21, I felt not only dazzled, but completely comfortable, even relieved.

She’s a mother, but not mine. She’s my friend.

By welcoming me into her home, she inadvertently showed me how to live a creative life and also be a mother. It’s not as if she mentored me in one particular field or offered copious advice, but she left a profound mark with the simplest gestures.. In my early twenties, I wanted to be an actor, and while I was auditioning and hustling and sending out headshots and doing a lot of wishing, I was also writing stories and plays. I remember her saying very calmly: Joey, you seem to be getting more green lights with the writing. She certainly never discouraged me from going on auditions and loved watching me perform when I did have the chance, but I heard the encouragement toward my writing life and it did make it easier to eventually let the acting go.

Later, when I was worried about my young twin boys being picky eaters, she told me that when she was a concerned young mother fretting about the same thing, the fancy Greenwich, Connecticut pediatrician sighed and said: Don’t you know, my dear, children basically don’t eat between the ages of three and thirteen.

Our own mothers can never be everything to us. There's something about finding a friend of our mothers’ generation, who can help, if need be, to fill in the gaps.

Last year on my birthday, my fairy godmother, left me a message. Just that morning, on a walk through the woods, she’d seen a deer nursing twin fawns. She loved this coincidence because it was my birthday and I’m a mother of twins. But also, Jonathan and I were born two days apart. Gemini, she calls us, and I love when she groups us together, as if I, too, am hers. And, of course, she isn’t a fairy of any kind; she’s an accomplished cellist, a former editor, a late-in-life actress, a widow. She doesn’t love cooking but makes a perfect salad and a strong Bloody Mary with Clamato; she’s eschewed email and the internet. Her name is Florence, a name that means, “I flower” as in: to blossom. She’s a mother, but not mine. She’s my friend.