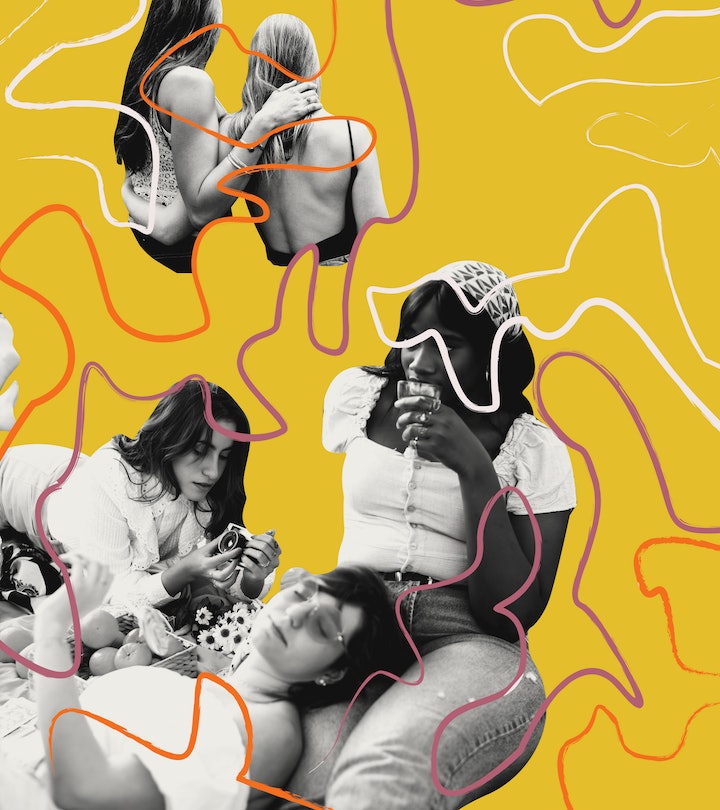 Mothers Or Not, Taking Care Of Each Other Is Always A Gift

Some of the people who have mothered me best have been women who are not mothers.

I was raised by women with great capacity to care for others. It might be imprinted into my genetic code. These women did everything: They cooked, kept immaculate homes, remembered everyone’s birthdays, and took us to appointments. I was rarely grateful for all of my mom’s service growing up, but I internalized that tending to others, namely men, was a part of the work of a woman.

Some of my earliest memories are of watching the women in my family care for men. They were magicians, anticipating the needs of their husbands and fathers, washing and mending and pressing their clothes, making their lunches, and raising their children. These women, moms, grandmas, aunts, and cousins, showed me that nurturing and care were shown in acts of servitude to others. In the bowls of pastina (tiny pasta noodles in homemade chicken broth) my nonna made me whenever I asked, in the way my mom would tend to me when I was sick. Women showed they loved you through care. Men didn’t, or maybe couldn’t. No one expected them to.

I spent many years single and in the shadow of this cult of motherhood, but before I ever questioned it, I benefited from it. Maybe because of that, for a long time I thought of motherhood as synonymous with being a nurturer, healer, caregiver, a beacon of love and affection, a forgiver. But just as those qualities aren’t universal in people, they’re simply not true of all mothers. In fact, some of the people who have mothered me best have been women who are not mothers; people like my friend Fariba.

I met Fariba in the spring of 2015, when I used up all of my savings to travel to Italy under the pretext that I needed to get away in order to write a YA novel. Three months into my Italian escape, I had my hair ruined and my heart broken in Verona (thanks Shakespeare), I was robbed by a cleaning lady in Florence, and I had written very little. Rome, I told myself, would be a reset.

When I got to my apartment, having conquered the ancient stone steps and completely sweat through my clothes, I was introduced to a fellow boarder, a woman my age named Fariba, and pointed towards my bedroom. It was not the spacious room I had been promised but a sad little room with Catholic artwork on the walls. The landlady, a rich French woman in white trousers and a casual striped button-down, appeared at my door and laughed in my face when I mentioned the room mix-up. Immediately, as though her cackle had been a curse, my throat started burning, my head pounded, and I knew I’d been struck with a dreaded summer cold.

The many little wounds of my youthful tenderheartedness built up enough scar tissue to protect me from unnecessary hurt, but also disconnected me from myself and gave me low expectations of everyone.

Robbed, scorned, sick, and living in enemy territory in the oppressive Roman July heat, I felt incredibly bad for myself. I missed being around people that cared about me. I missed my mom.

In romantic relationships with men, I spent years following my nurturing instincts and performing the caregiving I grew up with. They took it, with or without gratitude, but I never felt appreciated and was usually left heartbroken. Dating into your mid-30s and beyond is not for the faint of heart. The same men who enjoyed my home-cooked meals and let me hold their emotional pain in the palm of my gentle hand also equated those things with their own mothers, or maybe with the idea that I wanted to have their babies, and turned cold or peaced out. It always felt safer to receive and practice nurturing with other women, but I still struggled to find authenticity in female friendships. The many little wounds of my youthful tenderheartedness built up enough scar tissue to protect me from unnecessary hurt, but also disconnected me from myself and gave me low expectations of everyone.

So when, the next day, there was a knock at the door of my little rented Roman room, I started to cry, assuming the landlady was coming to kick me out in my weakest hour. But instead of mean French Coastal Grandma, it was Fariba carrying a cup of steaming amber liquid that she set down on the nightstand. “Poverina,” she said to me, slipping a couple of pills beside the drink, which tasted like the sun itself and soothed me to my core.

She brought me another cup of the miracle tea later that day. The next day, I lugged myself into the kitchen and was greeted by the comforting sight of a large pot of chicken broth boiling on the stove. Fariba found me and told me it was for me. I started crying again, this time because I was so touched, which made my nose run, which triggered a coughing fit, and I had to excuse myself.

Fariba, like me, a single woman away from her home country, single-handedly nursed me back to health like only my own mom or nonna had before her. I was 33 years old when Fariba showed me how to make her magic tea, and to believe goodness counts. She restored my faith in human kindness. I thought of her as an angel.

Chopped ginger, a cinnamon stick, and saffron, all boiled in a pot of water for 20 minutes, with lemon and honey added after. I made it for my mom and sister when I got back from Italy, and it’s now a family go-to for recovering from colds.

Unsavory relationships with men aside, I maintain that it feels good to do nice things for people. The world looks at women with increasing hostility as we dare to age, especially while single, and it’s frustrating and awful but there’s genuine satisfaction that comes with choosing to not buy into it; to instead be there for and take care of each other. I’ve always believed this, despite the temporary hardening of my soft heart, but never so optimistically as now that I’m raising a daughter of my own, one who happens to be naturally empathetic, kind, and helpful. I do my best to encourage those qualities in her alongside a strong sense of self-worth. I hope the light she gives out to the world shines back on her, always, and I hope that as she grows, she is surrounded by people who aren’t afraid to be kind and do good. People like Fariba.