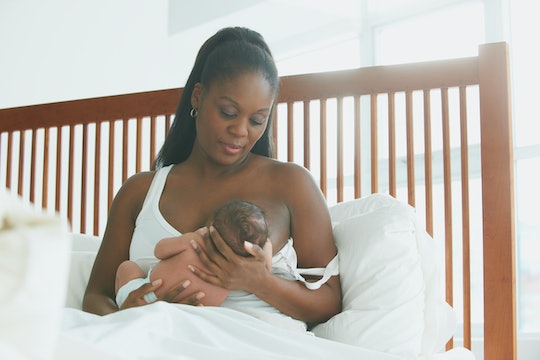 There's Power In These Images Of Black Mothers Breastfeeding

Representation matters, and for Black moms, that’s so much more than words. It includes having inclusivity in every aspect of motherhood, especially positive images of Black mothers breastfeeding to look to, normalizing it in our communities.

“The echoes of slave women being forced to give up their milk still resounded. And Black women didn’t talk to their sisters, daughters, and granddaughters about how to feed their babies; the bottle was just assumed. And for some women, breastfeeding was a ‘white thing,’” midwife Stephanie Devane-Johnson said in North Carolina Health News. Breastfeeding, as Devane-Johnson noted, wasn’t often passed down from our mothers and other female elders, and I can personally attest to this. My mother didn’t breastfeed my siblings or me, and I didn’t see it until my older sister decided to with her second child. When I asked other Black moms who breastfed about their experiences, they were quite similar.

“I was seen as stepping out of the norm. I did it with all four, and I loved it and they are the sweetest, healthiest children,” Lola, a mom of four, tells me.

Ericka, another Black mom who breastfed, says it wasn’t normal in her family either. “When I breastfed my daughter, I was met with resistance from family and friends,” she tells me. “Oddly, my younger generation family members were more accepting and followed in my footsteps.”

There are deep reasons why generations of women in our communities didn’t commonly breastfeed, some being lack of exposure and education. Because here’s what we haven’t had for many years: Images of Black mothers breastfeeding their babies in mothering commercials, pamphlets, breast pump or lactation advertisements, and historical depictions other than an enslaved wet nurse breastfeeding their enslavers’ white baby.

“You can’t replicate what you don’t see,” says licensed clinical psychologist Raquel Martin, Ph.D., who is also a Black mom currently breastfeeding her second child. Martin’s mother watches her breastfeed with fascination and has told Martin, “They never pushed this for us. It was never a thing.” Martin explains that within Black communities, there’s a detriment to so many things of not being able to see them. And the implicit message is that it’s not for us.

“Why would we ever think that something is for us when we don’t see us doing it?” she says. “That’s why modeling is so important. Not just for children, but for adults, too. If you see something specifically with another race of people, you’re gonna think it’s solely for them.”

But that has started to turn among Black mothers. Black-led grassroots foundations have been created as havens of support and education to fill this gap. A major part of Black Breastfeeding Week is having moms who’ve reclaimed the right to breastfeed their babies post a plethora of powerful images of them in the act. What makes these powerful? They change the narrative now and for future generations. They help open a door in our minds that has long felt like “access denied.”

And what I love most is that there’s nothing timid or demure here. These moms are owning it.

Because breastfeeding is natural

As natural as breastfeeding is, it hasn’t been. Seeing this beautiful mom surrounded by plants and kissed by the sun as she feeds her child is the epitome of embracing the body’s ability to instinctually provide for our children.

Because you do what you have to do

Be prepared to be unexpectedly exposed. When your child is hungry, they don’t care where you are or what you’re doing. And it’s expected that if they know how to get to the boob, they’re gonna pop it out and nurse. This picture is so real!

Because those first moments can’t be replicated

There’s nothing like those first few moments of breastfeeding your newborn. It’s that fragile time where you just want to get it right and put into practice what you’ve been planning for. This image of a Black mother during that time is a peak moment for us to know that we need this moment, too. The support, the sweet anticipation, and the love.

Because breastfeeding can inspire you to keep going

In this image, this Black mom is grateful that she’s kept going. Our breastfeeding journeys are unique in challenges, comfort, and even how long we continue to nurse. It’s OK to set a personal goal of how long you want to breastfeed and stick to that. You may be surprised at what you can do with the support of your village.

Because the village is so necessary

A photo of a group of Black women breastfeeding is the essence of having a village to share this experience with. Seeing it is inspiring and affirming. Where we once lacked support, we’ve created it for our communities. The organizing of Black Breastfeeding Week is the proverbial act of Black women saying, “We’ll figure it out ourselves,” providing resources that we desperately needed. No Black mother has to be alone in this journey.