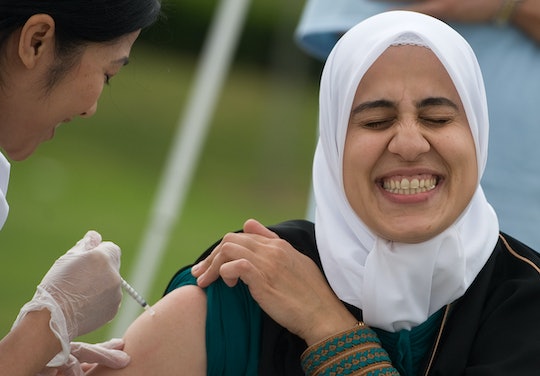 How Late Is Too Late For The Flu Shot? We're Not Out Of The Woods Yet

Maybe you held off on getting your kid the flu shot because they predicted that it would be a mild season. Or maybe it simply slipped your mind. Thing is, all it takes is one official-looking letter from school reporting a flu outbreak and you're scrambling to schedule the shot at the pediatrician’s office. But how late is too late for the flu shot? And are you doomed to weeks of worry (and potential) sickness if you don’t get it in time?

Not exactly. The flu season isn’t a short one. While flu viruses tend to be more widespread during the fall and winter, influenza can last well into the springtime, the Centers for Disease Control and Prevention (CDC) reported. Its peak activity is between December and February, which means that you still have time to get your children (and yourself) immunized. “While it’s best to get your flu shot as soon as the vaccine becomes available, it’s never too late,” pharmacist Tasha Polster, R.Ph., tells Romper. “Even if you don't get your annual flu vaccine until January or later, you can still benefit from it.”

Since it takes about two weeks to develop the antibodies to fight the virus after getting your flu shot, you should try to get the shot before it spreads in your community. And if you thought that the flu was just like getting a really bad cold and isn’t something to worry about, think again. The flu is a “serious viral disease that can lead to hospitalization and even death,” the U.S. Food & Drug Administration reported. In fact, the CDC found that vaccination during the 2017-2018 flu season “prevented 7.1 million illnesses, 3.7 million medical visits, 109,000 hospitalizations, and 8,000 deaths associated with flu,” as reported in the FDA article, “Now’s Still A Good Time To Get Your Flu Shot.”

Although you might try to ride it out, there are certain groups (i.e. your kids and your parents) who are more susceptible to getting the flu. The CDC found that those who are most at risk for catching the flu are young children, older adults, pregnant women, and people living with asthma and heart disease. They may experience pneumonia, sinus infections, bronchitis, and ear infections as possible flu-like symptoms. And if everyone in your house has the flu (which isn’t much fun), the chances of you contracting it become much greater, too. After all, the flu spreads when someone who's contagious coughs, sneezes, or even talks to someone just six feet away.

Plus, this year’s flu looks to be especially strong. “This year Influenza B is the predominant strain seen to be going around, which hasn’t been seen as the main flu strain in 27 years,” Dr. Alison Mitzner, a board certified pediatrician, tells Romper. “The past years have been predominantly Influenza A, but Influenza B is also more common in kids and can cause complications.” Plus, getting vaccinated provides so many benefits, including decreasing the duration of illness, preventing hospitalizations, missed work days and more. “It can also be life-saving in children,” adds Dr. Mitzner.

Depending on how you look at it, it’s never really too late to get the flu shot. “It’s important for people to understand that each flu season is unpredictable—we never know when it may peak or how severe it may be,” says Polster. “The one thing we do know is that the flu shot remains the best protection against influenza, and the CDC recommends a flu shot for everyone six months of age and older.” That means you still have plenty of time to get the shot and keep yourself (and your family) safe from all the sneezing and sickness that comes with influenza this year.

More Like This
The Covid Vaccine For Kids Under 5 Has Been Sent To The FDA For Review
Way Too Many Parents Have Zero Plans to Talk About Sex With Their Kids
Should Parents Consider Delaying Covid Vaccines Until Closer To School Starting?
What You Need To Know About Eating Burrata During Pregnancy