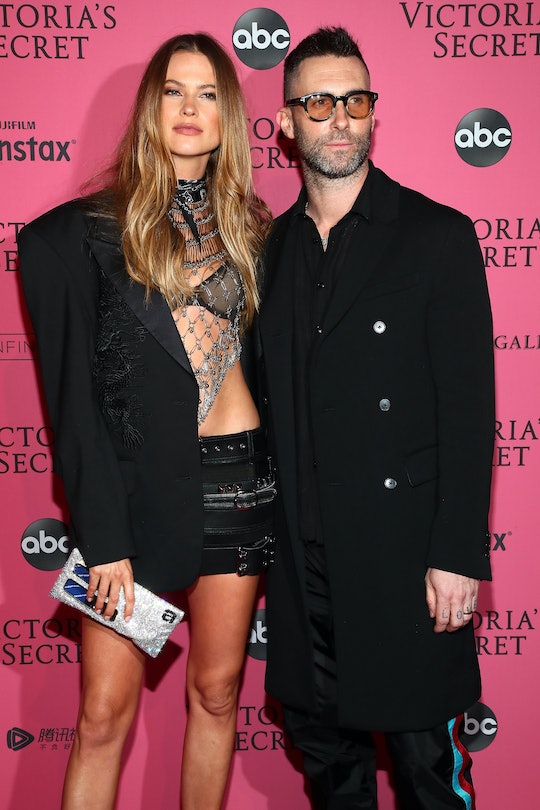 The Super Bowl is known for a lot of things beyond football — like the commercials and hot wings — but the mini concert halfway through the game might be the most popular. The halftime show has been a controversial one in the past (hello, Janet Jackson), but it's always entertaining. This year, at Super Bowl 53, Maroon 5 took the stage, and while many were excited to see the band play their favorites ("Moves Like Jagger" better happen, you guys), some were more stoked to see Adam Levine. But was Behati Prinsloo at the Super Bowl, too?

If you never spotted her, keep scanning. On Feb. 1, Adam Levine exclusively told Entertainment Tonight that his wife of nearly five years, supermodel Behati Prinsloo, would be at the Mercedes-Benz Stadium.

"My wife will be out here, though, very soon, which will be nice," he said in the interview, and it's not surprising. The couple has been very supportive of each other in all their endeavors. Just this past November, Levine made it to the Victoria's Secret Fashion Show in NYC to watch his wife make a triumphant return after two years away. He wasn't on the red carpet, as PopSugar reported, but he was sitting in the front row, enthusiastically watching her do her thing.

It's so sweet to know that Prinsloo was in the Benz doing the same Sunday night. The day before the Super Bowl, she took to Instagram to share a photo of her husband's band walking onto the field of Mercedes-Benz Stadium.

But while Prinsloo was there, some other important ladies from Levine's life did not catch the concert live in Atlanta. In the same Entertainment Tonight interview, Levine said that his daughters, 2-year-old Dusty and 11-month-old Gio, would not be in attendance. "The little kids, they are going to stay home. It is a little bit of a fiasco out here. It is a little crazy. So we are going to keep them home," Levine said. But he plans on giving them their own shoutout during the halftime show. "I am going to wear daddy bracelets so they can see that I am representing them well," he told Entertainment Tonight. "They get to watch on TV. I am sure they prefer that too, instead of the chaos."

I can only imagine how very real the chaos was inside Mercedes-Benz Sunday tonight, especially with so much controversy steeped in the NFL right now. But as the rest of America watched the Rams and Patriots battle it out, it's really cute to know that Dusty and Gio were watching their daddy rock it out on stage.

Levine and Prinsloo seem to be really great parents (Prinsloo's latest kid-related Instagram showing her children's collection of Peppa Pig figurines really did it for me), and I just love thinking of Sunday night as their date night while the kids watch from home. I mean, my husband and I see a lot of Marvel movies together kid-free in the theater, so I can basically relate.

But more than that, I love how supportive this couple is of each other. Whether they're in the front row at fashion week or front row at the Super Bowl, Prinsloo and Levine really seem to make each other a priority. I'm sure their kids will love seeing Daddy's bracelets, but seeing their parents support each other will be an even bigger part of their childhood.