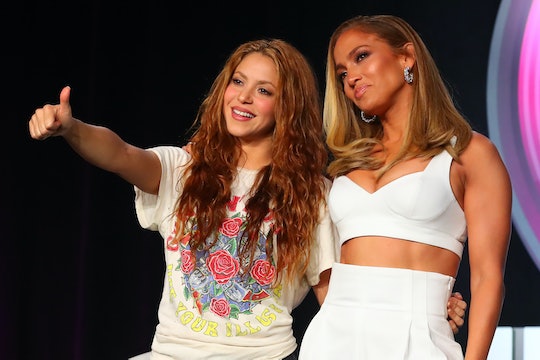 The Spice Girls might have made the phrase "girl power" a literal anthem, but J. Lo and Shakira hugging it out before Super Bowl LIV is girl power in motion. (And also in hashtags, as Lopez carefully curated her Instagram post with #GirlPower and also #LetsGetLoud. My two little girls are especially down with that last one.)

Can you even imagine the butterflies rattling against your rib cage before you perform the Super Bowl halftime show? But TBH I think I could do just about anything with J.Lo and Shakira by my side.

When it was announced that the Super Bowl LIV halftime show would include J. Lo and Shakira, the entire world basically lost it. Two women, two moms, two Latinas, two absolute entertainment powerhouses — it all makes for a really great, exciting moment. But personally, I'm just losing it because of all the early 2000s I spent scream-singing "I'm just Jenny from the block" and "my hips don't lie" at the top of my lungs. I don't have a flavorful, spicy bone in my body, but anyone can shimmy when they're listening to J. Lo and Shakira, including me, a woman whose skin is the color of slightly warmed oatmeal.

And this sweet moment is just the icing on the cake. I feel like the two of them would hug literally anyone backstage, but it's obvious they really have a kinship here, and it goes beyond singing in front of millions of people. Sometimes you just need your best pair of hip-hugging pants and a good friend.