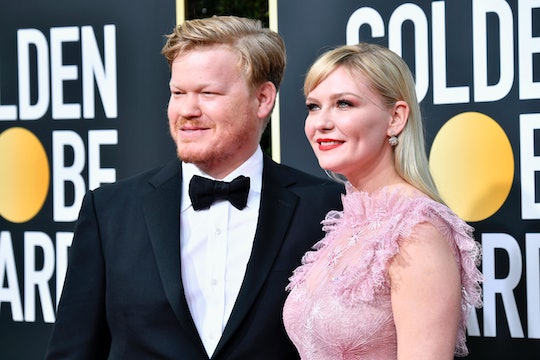 Kirsten Dunst was a literal child when she was nominated for her first Golden Globe, telling Giuliana Rancic on the E! Red Carpet Sunday night that she was just 13. I mean, that's much more glamorous than my own teen accomplishments. ($10 says she didn't wear white eyeliner to the red carpet.) But now? Now Kirsten Dunst is at the Golden Globes 2020 as both a mother and a wife, and she told Rancic that she and her husband are "treating this as a parents' night out." I'm not an actress earning major hardware for my shelves, but I am a mom to two children, and you know what — I get it.

When you think of the Golden Globes as any kind of work obligation, it makes even more sense. Every December, my husband and I have a fancy parents' night out where we dress up, leave the children with a grandparent, and head off to his office Christmas party. It's almost always at a restaurant we wouldn't go to on our own dime, we always drink too much, and we get to sit with a group of friends we don't normally see that often. It's basically an awards show, and it's absolutely a parents' night out for us.

But it's not just awards shows that have changed for Dunst now that she's a parent. She also told Rancic that becoming a mother has given her more "freedom" as an actress, and I get that, too. Children have a way of reminding you what's really important in the world (so, you know, your job isn't always a life-and-death situation), but they also help you release your inhibitions and give you courage to tackle things you might've been wary of before. You just thought that new role was going to be scary, but then you had a puking baby who didn't know how to turn her head toward a bowl or toilet at 3 a.m. and things got real.

And in true Golden Globes fashion, Dunst told Rancic she was wearing Rodarte, which came in the form of a gorgeous, lovely pink lace gown. She let out a #humblebrag that she got to pick the lace "from her bed" and again, I'd like to remind everyone that I'm just like Kirsten Dunst — I also choose my best "parents' night out" clothes from my bed. But it's more like sniffing a pair of jeans to see if they're OK to wear out for nachos, or if I can just put a fresh pair of yoga pants on instead. You know, glam!