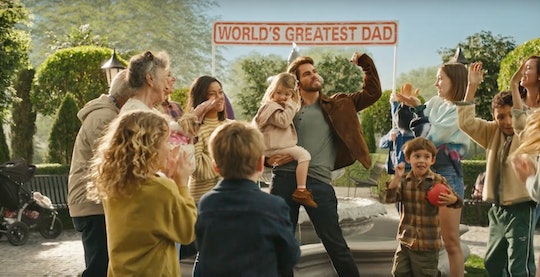 Taylor Swift's "The Man" music video has, as usual, been full of little Easter eggs and symbols that relate directly to Swift's story, but one 15-second scene in particular is a rallying cry for moms everywhere: the World's Greatest Dad in "The Man" music video is actually infuriating to behold.

Truly, every mother has seen it, heard it, witnessed it — when a father does one ounce of parenting work, he is heralded as a hero, a saint, the World's Greatest Dad. Whether it's changing a diaper, taking the baby to the pediatrician, or "letting" mom sleep in for an hour while he feeds the baby a handful of dry Cheerios (Letting! Don't forget, he's letting her get actual rest for her tired body!), he is now the actual best, and every mother should fall to her knees and be grateful that he also knows how wipes work.

In the music video's scene, you can see "the man" sitting on the edge of the fountain on his phone while his daughter sits next to him (Let's not make a judgement about him being on his phone, OK?), and the background is flooded with moms and strollers, babies, and kids. As he stands, he picks up his daughter and flings her into the air, and that's when the entire world notices. Look at him! Look at that great dad engaging with his child! Look at this Norman Rockwell painting come to life!

Look, I have a great husband and he's an incredible dad to our two little girls. I work from home and am the primary caregiver — he wouldn't argue with this — and it didn't bother him one bit for me to go on a three-day work trip and leave him as the sole parent. He actually did take the girls to the park (I'll have to ask if there was a parade), made them tacos, got them dressed and off to school, and I was grateful and happy that my children have a good dad and that I have a good partner. But I wasn't impressed. I don't owe him anything for "letting" me go on a work trip while he took care of our girls, and I don't feel like he deserves any reward for being their parent.

Obviously Swift's entire song is an anthem for women and the standards we are up against that men aren't. But this scene is a rallying scream for mothers everywhere. Moms in airports are side-eyed because oh god, they're not going to bring that toddler on board, are they? while dads in airports are considered the ultimate saint for attempting to travel with a child. I cook dinner nearly every night for my two girls and husband, in between emails and Barbies and laundry and meetings and writing, and nobody says I should get a free weekend all to myself for it. I once had someone honk at me in a grocery store parking lot because I was standing in the space they wanted, trying to buckle my children into their car seats — when my husband takes the girls alone to the grocery store, I can practically feel the wow, what a good dad vibes the entire store gives him as he procures a gallon of milk.

Short of flipping the entire world upside down like a snow globe and shaking some sense into everyone, all we can keep doing is batting away the double standards. You can be grateful and happy and thankful for your children's father — and you can also expect them to know how to put the sippy cup back together and take the kids to play outside without a parade. (And you can expect some of the same gratefulness, too.)

More Like This
Janet Jackson's Son Eissa Is A Little Musical Prodigy In The Making
It's A Beautiful Day In Jenny Slate’s Neighborhood
Jennifer Hudson Is A Proud Mom, An Accomplished Artist, & Now An EGOT Winner
Ciara’s Kids Make The Sweetest Cameo In Her New Song “Treat”