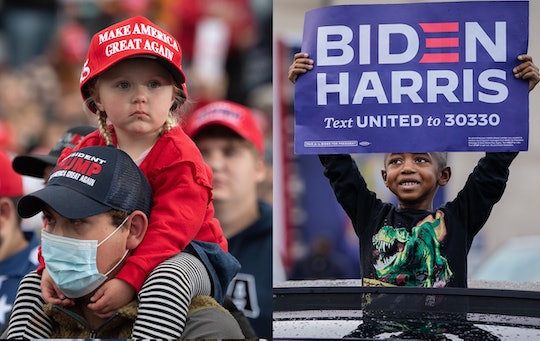 What Do Little Kids Really Think About This Election? We Asked Them.

“Little pitchers have big ears.” It’s a colloquialism from our grandmothers’ era that makes literally no sense anymore but means that kids are listening, all the time. With the coronavirus pandemic literally shutting our children into our homes for unfathomable amounts of time with us, they are truly listening all the time because we are never alone. As the country barrels towards November 3rd, our kids are more immersed in politics than they have been during any other presidential run-off. As we talk around our kids, over their heads, in their earshot as we send WhatsApps and MarcoPolos and Instagram messages back and forth with our friends, what are they absorbing about the election? Has anyone asked them?

Six-year-old Gianna, of New Castle, Pennsylvania, is listening. Her mother plans to vote for Biden and her father, for Trump. While they haven’t overtly tried to sway her one way or another, the first grader has formed strong opinions about the candidates. She tells Romper she was upset by the debate and the lack of decorum shown by Donald Trump, which goes against the rules she has been taught about how to be a good friend. Her mom Jessica made sure to never explicitly tell her she did not like Donald Trump, but when her daughter came to her about the candidate, Jessica was honest about her feelings. Her father, Tony, has been honest about his, too. This has left her parents having to have some serious discussions about people with different beliefs and opinions with Gianna.

When asked about each candidate’s goals for the country, Gianna summed it up like this: "I think Donald Trump is saying he’s trying to help but he actually isn’t. I think Joe Biden is trying to help the country and help them be able to go to the doctor to save their lives.” Gianna references “the Affordable Care Act” and “universal health coverage,” one of the central debates of this election. When asked about the actions of the candidates, both good and bad, Gianna was clear on where she sees failure and strength. “Trump didn’t take coronavirus seriously and waited too long to act. I don’t think he doesn’t anything good. He’s rude and lies. Joe Biden is trying to open up healthcare. I don’t know about anything bad he has done.”

Gianna thinks the role of president is to take care of the people of your country, and when she runs one day she plans for her campaign slogan to be, “I want to help America!”

Andrea Barbalich is the (grown-up) Editor-in-Chief of The Week Junior, a magazine geared towards helping kids understand current events, and she has spent a great deal of time perfecting just how to talk to kids about politics. “Many students were asked to watch the [first] debate for social studies class, and what they saw on TV didn't match what they had been told a debate should be: a respectful discussion comparing experience and ideas in a format that was agreed to, with rules that were followed,” she says. “Some kids were even worried or scared by it. Children have a strong sense of justice, and many felt that the shouting and interrupting that took place wasn't fair.”

That is exactly how 4-year-old Walden of Petaluma, California felt watching that debate with his family. He got tired of grownups interrupting each other so he went to his room to play with his stuffed animals instead. Mom Lindsey and her husband don’t shy away from the tough subjects with their four children. “We are very open in talking about current events and politics with our kids. We do make our own positions clear, but also give supporting information for why we feel the way we do. They have people in their lives all along the political spectrum.”

However, when pressed by his mom if he had to assume the most important role in the land, he declares his campaign slogan would be: “Calm down the people.”

Nothing will ever get as bad as this. We have coronavirus, and some of the people can’t get out of the wall, and we also have racism.

In Los Angeles, 10-year-old London, a voracious learner who chronicled her journey to read 1000 books, also watched the infamous debate and has thoughts. “All Trump was doing was saying ‘WRONG’ and just talking over everybody else.” She isn’t sure if he has an actual goal for his presidency, but she thinks it might be to get rid of world peace. London is worried about the wall he built “where Mexican people can’t get out if they need to,” and she believes he is doing something nefarious in his dealings with China and Russia that makes adults unhappy, but doesn’t fully understand what yet. (Do any of us?)

She knows her mom Lydia Elle is voting for Biden. “I don’t know much about him, but I think he might be doing good,” London says, “Nothing will ever get as bad as this. We have coronavirus, and some of the people can’t get out of the wall, and we also have racism.”

What about a campaign slogan, when she runs someday, as Senator Harris sparks dreams for little Black girls like London? “Vote for London Loree… and I don’t know if it should rhyme?” she ponders. (Loree, her middle name, is pronounced lor-ray.) “Vote for London Loree and you will have better days!”

Barbalich encourages the kind of conversations London and Walden’s parents are having with them. Not just stating a preference, but explaining why. “At home, it’s ultimately up to parents to decide how much they want to share about their own views and who they plan to vote for. This can be a way for parents to share their values and engage in the political process with their children."

She notes that taking children to vote on Election Day is a tradition in many families, saying, "If parents decide to reveal how they’re voting, I would encourage them to engage in a conversation about that decision and use it as an opportunity to open up a dialogue.” Because not talking to our kids about these issues doesn’t mean they aren’t hearing about them — from political ads on YouTube to what their friends say and the plethora of signs and banners they pass every day as an election approaches, they are absorbing messages. This is why it is critical we shepherd the conversation as parents.

In Lancaster County, Pennsylvania, 6-year-old Calliope has been to the polls every single year of her life with parents Casey and Jeff Hambleton. She is a passionate small advocate, and chose politics as her add-on class for homeschooling this year. Her parents made the decision to withdraw her from public school after they saw how much she thrived learning at home due to COVID-19 in the spring semester, and this has allowed them to really tailor her education to her interests. Her mom has been navigating Calliope’s independent streak since toddlerhood, and is enjoying getting to watch it blossom during this monumental political season. “She definitely makes up her own mind. She picked Joe Biden early on when her father and I were still voting Bernie Sanders in the primaries.”

When asked to explain what she likes about Biden, Calliope notes some specific platform points that stuck out to her. “He picked a woman to help him run the country. The president can make America good. Biden fights for girls.” Her opinion of President Trump? Her parents let her form her own from watching and listening to current events. “He let lots of people die from COVID, and told people they didn't need masks, and he doesn't wear one, either.”

“I know he wants to build a wall that will keep us safe from people who might hurt us.”

On the other side of the aisle, 7-year-old Ethan outside of Katy, Texas, supports President Trump along with his parents Zach and Michelle. He thinks it sounds like a good idea to Make America Great Again, and since his school has returned to in person learning without any issues he is not very worried about the coronavirus anymore. When asked what are some good things that Joe Biden has done, he shares that he was Vice President before so knows some things about being president. He isn’t sure he will do a good job, though. As far as good things President Trump has done? “I know he wants to build a wall that will keep us safe from people who might hurt us.” He isn’t sure Trump has done anything bad. If Ethan ever runs for president, his slogan will be “I will do the best job for you, America!”

These five children are not unique in their thirst for understanding, according to Barbalich. This is what has driven her to work so hard to create current event content just for kids. “Children are aware of what's happening in the world, possibly more so than they’ve been given credit for in the past. This generation is informed, engaged, and involved. Many children have told us, ‘We want to know what the adults know.’”

More Like This
Elmo Talks About Getting His Covid Vaccine In A Cute New Video
Lauren Conrad Shares Experience With "Lifesaving Reproductive Care" After Ectopic Pregnancy
Should Parents Consider Delaying Covid Vaccines Until Closer To School Starting?
Ketanji Brown Jackson Spoke Directly To Her Daughters In Her Powerful Opening Statement