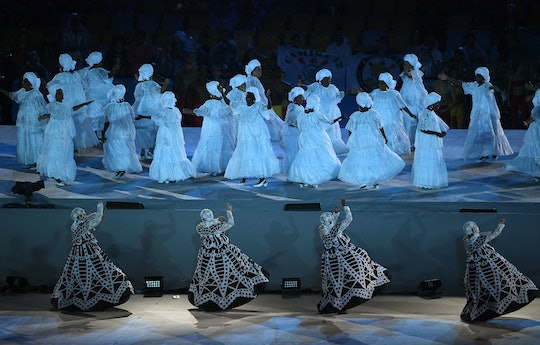 What Tradition Do The Women In White Honor At The Closing Ceremony? It's Important

Rio celebrated the closing ceremony of the 2016 Summer Olympics on Sunday, August 21, and, among the elements the show paid homage to was the influence of black women on Brazilian culture. So what tradition do the women in white honor at the closing ceremony? It's a representation of the enslaved lace weavers who are responsible for one of the country's native crafts.

Just as the opening ceremony included a somber (if glossed over by commentators) acknowledgement of Brazil's history of slavery and Portuguese colonization, the closing ceremony paid tribute to the contributions of black female slaves with a somewhat more reverent and uplifting tone than the dirge of the opening ceremony.

The segment featured black women in dressed in white, dancing and singing joyfully, while huge projections of intricate lacework were thrown across the Maracanã Stadium floor. They represented the iconic Brazilian tradition of bilro lace weaving, which came to the country through Portugal, but the segment itself lent vital visibility to Afro-Brazilian women who often fall victim to the country's deeply ingrained racism. Unfortunately (and unsurprisingly), commentators chose to focus on the "pretty crafts" part.

"This honors a tradition in Northeastern Brazil: lace weaving. Hearkens back with its roots in the Portuguese culture we saw just a moment ago. It's a big tradition in Northeastern Brazil. This pays tribute to the black culture and influence in Brazil. Back in the day, the slave women were authorized by their masters to sell lace products in the streets. They made some magnificent designs. The webs on that projection on the floor are supposed to represent the power, the collective work, the special art of these women. That's pretty."

This wasn't the only tribute to Afro-Brazilian women the Rio Games paid, although the other prominent one came in a much younger package. Remember MC Soffia, the 12-year-old rapper who performed at the opening ceremony? She, too, pens rhymes that empower black girls by addressing the racism and sexism black women face living in Brazil and unapologetically celebrating black womanhood in the face of it.

Although the 2016 Olympics came with its share of trouble, the effort that went into creating a thoughtful and education ceremony made it all worth it.