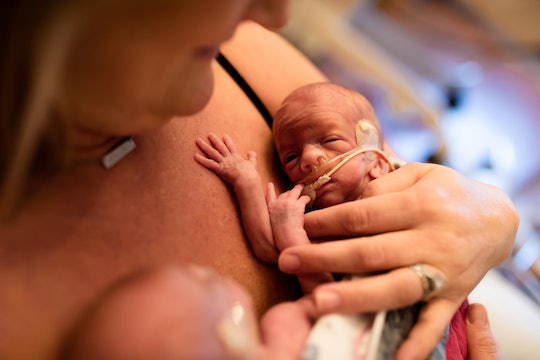 Here’s The Average NICU Stay For Twins, According To Experts

The idea of NICU time can be scary, but experts say your babies are in good hands.

The topic of birth for twin moms is a loaded conversation. You’ve already had to mentally double everything, but making it to your due date with two healthy babies becomes your primary concern even before your belly begins to round. Weaved into that is wondering if your babies will need time in the neonatal intensive care unit (NICU) and, if so, what is the average NICU stay for twins. While every parent's experience is different (all twins don’t have to go to the NICU), with pregnancy you always want to err on the side of preparation.

“Around one in four twins get admitted to the NICU. That’s two-and-a-half times the rate of all babies,” says neonatologist Kevin Kathrotia M.D.

Having an idea of how long twins stay in the NICU can help settle your concerns, and you can develop a plan for what you’ll need during this time. The length of your twin’s NICU stay will depend on your baby's health condition and the reason(s) for neonatal care.

Reasons twins get sent to the NICU

The most common reason twins are sent to the NICU is for prematurity, according to neonatologist Dr. Pam Griffiths M.D.

“Many twins are born in the late preterm category, 34 to <37 weeks gestation,” Griffiths says. At these gestational ages, their bodies haven’t fully developed, causing some issues that make time in the NICU necessary. She says common problems include:

In the NICU, they receive care as they continue to grow and any medical assistance necessary to address these health issues.

“These infants may receive care in a warmer bed or isolette, receive IV fluids with a sugar source, and receive instruction on feeding and oral or nasal tube feeds while gaining feeding skills,” Griffiths, who specializes in neonatal care, says. She adds that it’s common for these babies to receive routine blood tests and need phototherapy treatment for jaundice.

The length of stay varies for each baby based on their condition, and one determining factor is how premature they are. Before your baby can go home, they must reach certain vital milestones.

“The baby needs to be able to eat and grow on their own without additional oxygen or breathing assistance,” Griffiths says. Whether or not your baby can do this depends on how developed their body is. “More mature babies can achieve these goals faster.”

Based on the weeks of gestation your twins are born, here’s how long the experts say their NICU stay could be:

“We aim to send babies home when the medical team feels they can thrive in the care of their parents without the need for medical intervention,” Griffiths says.

In the few moments that you can’t be by your babies’ sides, Griffiths offers a bit of reassurance. “The nursing and medical staff caring for babies in the NICU have a passion for taking care of babies, no matter what their condition, and will be there to support you and your babies.”

There’s a lot, emotionally and physically, that goes into taking care of your twins during a NICU stay, but you should take care of yourself too. “Make sure you enlist help from friends and family with things like cooking meals and watching the older kids,” Kathrotia says. So, while you’re showing up for your babies in this sensitive time, let your village show up for you.

More Like This
Mom Gives Birth To Record-Breaking 16-Pound Baby
Cradle Cap Is Normal & So Is Your Desire To Get Rid Of It. Here’s How
Why Does My Newborn Shake Sometimes? A Pediatrician Explains
These 72 Instagram Captions Are Perfect For Your Snow Day Pics
What Parents Are Talking About — Delivered Straight To Your Inbox