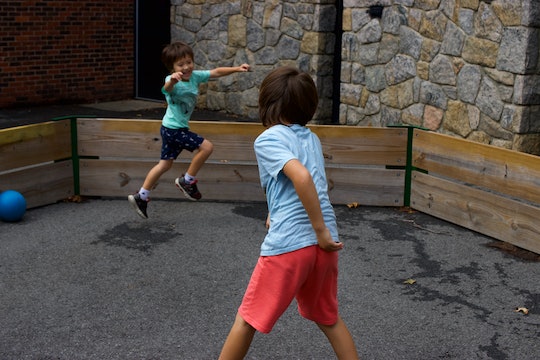 Here's Everything You Need To Know About Gaga Ball

In many ways, dodgeball was the great old-school equalizer. If a kid made fun of your momma during science class, well, then you waited until gym so you could throw a ball as hard as possible at their face — all in the name of the game. Good times. But then, gym teachers got wise to what was really going on, and dodgeball slowly started getting eliminated from Phys Ed. In its place: GaGa ball. But what is GaGa ball? Chances are, your kid is going to love it.

When Did Gaga Ball Start?

Kids are always looking for a way to wallop one another, and for a long time, dodgeball filled that need. But a lot of bloody noses (and complaining parents) put a kibosh on all of that, so dodgeball was sometimes deemed unsafe for school. That allowed for the rise of GaGa ball, which originated in Israel back in the 1970s, according to GaGaballpit.com. (In fact, the word GaGa means “touch-touch” in Hebrew.) It’s also known as Israeli Dodgeball, for that same reason, and is thought to have arrived stateside by Israeli camp counselors who taught it at Jewish summer camps.

How Do You Play GaGa Ball?

While the rules for playing GaGa Ball can differ slightly, most have the same format. Usually (but not always), play begins in a “pit” of sorts. One player tosses the ball up in the air, while players yell “Ga” when the ball bounces the first time, and “Ga” again on the second bounce. Then, it’s every person for themselves. You can hit the ball with your hand or fist to eliminate someone else, (you can only hit it once), and any player who gets touched by the ball below the waist or knees is out. If the ball flies out of the pit, the last person to touch it is also out.

How Does Gaga Ball Differ From Dodgeball?

It would sound like GaGa Ball is the kinder cousin to dodgeball, and in many ways, it is. For starters, you’re not allowed to “accidentally” aim at a person’s face; only hits below the waist or knee count. Play usually happens in a pit, whereas with dodgeball, you’ll probably be playing it in the open in a school gymnasium — if you even get to play at all, since dodgeball is banned in some elementary and middle schools, Public School Review reported. GaGa Ball games typically last for five minutes, and if it looks like there are still too many players in the pit, a second ball might be added to expedite the game, per GaGaCenter.com. As in dodgeball, the last player standing wins.

Where Can You Play GaGa Ball?

Most likely, your child will play GaGa Ball at school, especially if dodgeball has been ditched from the the school’s PE curriculum. Some parents might opt to purchase a pit, but they can have a hefty price tag (some cost upwards of $2,000), but that might be a small price to pay for showing your child the importance of sportsmanship, and why slamming another student with a rubber ball in the name of winning just isn’t worth it.

With its gentler rules and ability to create a more compassionate playing field, it’s no wonder why GaGa Ball has such a fan following. By removing the ability to be bullied or potentially hurt, and focus instead of fun, fast play, it’s really easy to see why kids everywhere are gaga for GaGa Ball.