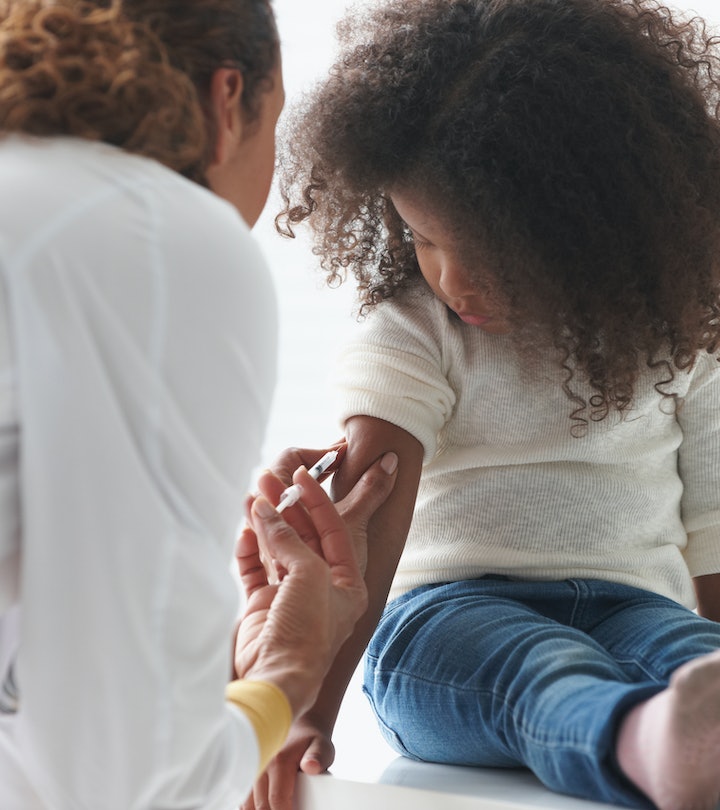 Polio Is In The U.S., But Don’t Freak Out Just Yet

Your kids have probably already had polio vaccines. Here’s what you need to know.

In case your parent-heart hasn’t been through enough lately, cases of the polio virus has been found recently in the U.S. and beyond — they’ve popped up in New York, London and Jerusalem — and a lot of people (specifically, me) are freaking out a little bit. Wastewater testing in both New York and London suggest that there is some degree of community spread in both places, which has prompted officials in London to offer a booster to all children between 1 and 9 years old.

The idea that the polio virus, which many of us associate with scary black-and-white photos from the ‘50s of children languishing in iron longs for months on end, could be circulating again is an unsettling one. But what does it mean that polio is in the U.S.? What can we do to protect ourselves and protect our kids from polio? For expert insight — always a calming thing — in this moment-that-feels-like-a-crisis, I turned to Dr. Colleen Kraft, a pediatrician at Children’s Hospital Los Angeles, and former president of the American Academy of Pediatrics.

In a small number of polio infections, the polio virus can infect a person’s spinal cord, causing paralysis.

What is the IPV vaccine?

Because the IPV vaccine carries no risk of vaccine-derived polio — and is therefore safer than the OPV — it has been the only polio vaccine given in the U.S. since the year 2000.

Who should be vaccinated against polio?

Everyone should be vaccinated against polio, Kraft explains, and (here’s where you get to breathe a hefty sigh of relief) most adults and children over 4 years of age in the U.S. have already received the full series of polio vaccinations.

My daughter is 13 months old. I checked her vaccine record using MyHealth and can see that, per the CDC’s polio vaccine schedule, she's had three doses of IPV. So, is she protected from polio? If so, how protected? “Three doses of IPV provide 99-100% protection,” says Kraft, speaking sweet music to my ears. “She will need a booster when she turns 4 years of age.”

How long does immunity from the polio vaccine last?

If the polio virus that has been found in New York wastewater does indeed indicate some degree of community spread, will we need polio boosters? Or are adults covered by the polio vaccines we received in childhood? “The longevity of the vaccine is unknown,” Kraft says. “This is why adults who travel to polio endemic areas can have a booster dose of IPV.” So yes, polio boosters could be made available if there is a need.

Is the oral polio vaccine to blame for this recent outbreak in the U.S. and London?

In short, no, OPV is not to blame for this outbreak. “The polio that has re-emerged is wild type polio, not related to the vaccine,” explains Kraft. Rather, Kraft believes that global vaccine hesitancy is likely responsible for the current re-emergence of polio. “You need a critical mass of people vaccinated for community (sometimes called “herd”) immunity. When vaccination levels decrease, deadly diseases can emerge.”

Can you still get polio if you've been vaccinated?

For the most part, no. “If you were vaccinated with OPV, there is a small chance of virus reactivation should you develop a disease that results in your immune impairment,” Kraft explains. “But this is extremely rare.”

How to check your family's polio vaccination status:

Public schools require the polio vaccine for all students, so most kids have had the full series by the time they start kindergarten. However, if you’re at all unsure, you should consult with your pediatrician. They’ll be happy to let you know your child’s vaccination status, and should be able to point you towards your kid’s vaccine records, as well as offer to get them up-to-date if they’re behind on their polio vaccine schedule (or anything else!).

When I asked Dr. Kraft what she would tell a parent who is freaking out a little (again, me) because polio is in the U.S. right now, she offered this: “The best protection against polio virus is immunization. If you are immunized, and if your child is immunized, you are safe.”

Rest assured that, as long as your kid is up-to-date on their immunizations, you can breathe easy. If you’re at all unsure, give your family’s health care provider a call and confirm that everyone is covered.

Dr. Colleen Kraft, a pediatrician at Children’s Hospital Los Angeles, and past president of the American Academy of Pediatrics

More Like This
Cradle Cap Is Normal & So Is Your Desire To Get Rid Of It. Here’s How
A Parent’s Guide To Stomach Pain In Kids
Diastasis Recti Exercises You Can Do At Home To Heal Your Abdomen
Doctors Swallowed LEGOS To Prove Everything Is Awesome For Kids Who Do The Same
What Parents Are Talking About — Delivered Straight To Your Inbox