Put a fork in me 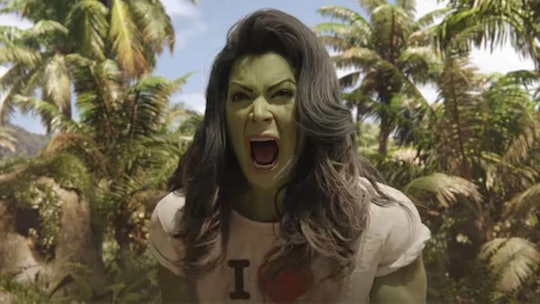 You can’t let anger blind you when you still have kids to get to soccer practice.

In the past four months, since giving birth to and bringing home my third daughter, my middle child — a 3-year-old — has become hyperaware of shifts in my mood. She is prone to either accusing me of being tired (“YOU TIRED!” she shouts when she can sense that I’m not at my best) or gentling asking, “Mommy? You OK?” when I’ve snapped for the fifth time that day over LEGO pieces hitting the ground or dog hair accumulating in a dusty corner or the half-and-half curdling in my now-ruined cup of coffee. It is both maddening (I am tired, but what is it to you?!?) and also devastating. She is seeing the fourth wall break, that one that keeps us all grounded and in line and not throwing toddler-style tantrums in the grocery store because we are adults. She sees a glimmer of how I’m feeling underneath.

She sees me become She-Hulk.

“Hulking out” long ago entered the lexicon to describe a sudden freakout or explosion of temper. But whereas the Incredible Hulk is a creature driven by instinct and rage, whose actions his altar ego Bruce Banner can neither control nor remember, She-Hulk is fully in control of both her strength and her faculties. The character, deftly brought to life by Tatiana Maslany in the new Disney+ series She-Hulk: Attorney at Law, is herself (a lawyer named Jen Walters), only green.

She-Hulk is angry, but able to speak in complete sentences and continue doing her thing. Walters feels the rage coming and can deftly step out of her courtroom shoes so she doesn’t destroy them before she morphs. She braces herself for those (very) big feelings and acts accordingly so she can turn the stress into something useful.

I'm an expert at controlling my anger because I do it infinitely more than you!

The show is (charmingly) aware that She-Hulk’s ability to remain in control — even while being absolutely infuriated — is a pitch-perfect analogy for the 21st century woman. As Jen Walters tells her cousin Bruce Banner, “I'm an expert at controlling my anger because I do it infinitely more than you!” All of us have been in that moment of desperately wanting to Hulk out but having to stop ourselves because we’re women. A woman smashing buildings out of rage and unable to speak about it isn’t a superhero — she’s crazy, bro.

There’s something about being a mother that really locks that skill in.

Mom rage (at least as I use the term) doesn’t mean you’re angry really; it’s just that sometimes the overwhelming parts of being a parent — like when Cocomelon is blaring from the TV and someone is yelling at you from the bathroom to wipe their butt, and you step on a plastic doo-dad — can trigger a Hulk-sized response. It’s the state I’m in when I snap and yell, “Why am I the only one who cleans up anything?!” and when I say calmly, but out loud, “OK, Mommy is officially done.”

Most mothers I know are fairly adept at not letting the anger blind them. You have to let the anger happen without letting it happen. Because you don’t want your kids to think you’re mad at them and you don’t want the guilt of being mad (You wanted to be a mom! Cherish every moment! You knew what you were signing up for!) to keep you from functioning.

“Mommy loves you very much, but you need to clean up these toys right now before I throw them all away,” says the Mom-Hulk.

Oh, and also, you still have to get one kid to piano lessons and another needs a diaper change and it’s 5:30 and haven’t started dinner yet, and you have a bunch of work emails you still have to respond to. Who has time to Hulk out?

Moms only have time to become She-Hulk, to control our anger in a way that makes it useful. “Mommy loves you very much, but you need to clean up these toys right now before I throw them all away,” says the Mom-Hulk. We remain who we are even as anger and frustration and stress fill our every cell. We can’t let the rage at children being shot in schools turn us into Hulks — we can only let it make us advocates, fuel our protests, spur us on to call our senators once again. We can’t become unhinged when schools are the first to close down and the last to open up; when there are more families on the waiting list for day care than there are spots in the program; when there’s money in the budget for everything except paid maternity leave; when our fundamental rights to control if and when we will become mothers are stripped by people who will never, ever know what it takes to be one.

We’re experts at controlling our anger because we do it infinitely more than anyone.