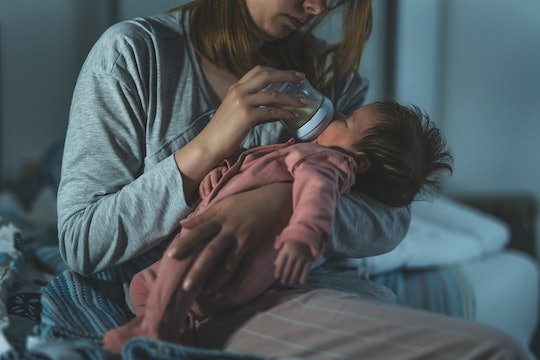 Switching To Formula Saved My Sanity

Letting go of breastfeeding created the breathing room I needed to be a more relaxed, more balanced mom.

Nellie was 3 days old when I first told my husband I wanted to quit breastfeeding. I persisted through those first few sleepless weeks, but the thought of quitting persisted, too. I agonized over whether or not to make the switch for a million reasons. Mostly, though, they can all be summed up as run-of-the-mill, severe mom guilt.

I breastfed my first son, Griffin, for two-and-a-half years. Why was I so willing to give up after a few weeks with Nellie, my second? What was wrong with me? It’s a pandemic! What kind of mother would deny her newborn baby protective antibodies because she’s a little overwhelmed by caring for two children? Nellie was a C-section baby and she literally latched while I was still on the operating table. My milk came in when she was about 30 hours old. Physically, breastfeeding was decently easy enough, and supply was not a problem. And this is where I have to say something like I know I’m so lucky and sort of apologize for even complaining about breastfeeding when my body is relatively cooperative about it.

Mentally, though, breastfeeding was anything but easy. I knew from my experience with my first the mental toll that being your baby’s sole source of food can take and I realized almost immediately — after spending my whole pregnancy assuming that I’d nurse Nellie for years, too — that I didn’t want to do it.

I was OK in the hospital, with nothing to do but stare at my newborn and sleep when she slept, but once we were home, everything came crashing down. Exhausted and anxious, I could not figure out how one mother was supposed to take care of two kids. I felt ridiculous for ever thinking that I wanted another child. We had it so easy — Griffin was potty trained, sleep trained, and old enough to do so many things for himself. What was I thinking?

And, though I was too scared to articulate it, I knew I hated breastfeeding this time. I hated how it fell totally on my shoulders. I hated that it meant I was always more tired than my husband. Most of all, I hated how it constantly pulled me away from Griffin, my 3-year-old.

He and I would sit down to play — a Herculean effort on my part as I recovered from the C-section and coasted on tiny gasps of sleep — and inevitably we’d just begin to find a groove when Nellie would start crying. My husband would walk in with the baby, helpless. “She’s hungry,” he’d say, apologetic, then he’d dump her into my arms. My heart would sink and my 3-year-old would shut down. Griffin’s head hung as he walked off, resigned to my departure. I hated it. Breastfeeding made me resent my innocent baby girl simply for being hungry, and I hated that, too.

After five weeks of pushing through and a 90-minute lactation consultation that left me with more questions than answers, as well as impossible “homework” (I’m supposed to spend how many minutes a day massaging her gums?!) that I could not begin to imagine finding time for, I called my mom in tears. The little voice telling me that life might be easier if I stopped breastfeeding, and maybe that was OK, was finally louder than my mom-guilt voice. My mom encouraged me to do what I needed to do, and gave me the obvious-but-needed assurance that I was a good mom and that Nellie would be fine either way.

Pandemic pregnancy meant that my closest group of pregnant-lady friends existed in the form of a private subreddit. After talking to my mom, I hopped online and posted in the group, asking them to sanity-check my reasons for wanting to switch to formula. They came back at me almost immediately with bottomless support and wisdom. “Yes your reasons are valid, but also you don’t need reasons!”

My heart grew lighter and lighter as I digested the idea of sharing the work of feeding our baby with other caregivers.

Bolstered from all sides, I called the lactation support department at the hospital, with fingers crossed that I’d talk to someone supportive. I took a deep breath, braced for the sound of judgment. “My baby is 5 weeks old and I want to feed her all or mostly formula. How do I stop breastfeeding?” I lucked out. On the other end of the line, I heard simply the straightforward answers I needed: Start swapping out every other feeding for formula. If I became engorged, I could pump a little, but only to the point of relief. If I drained my milk, she explained, that would tell my body to make more, and we were trying to tell it to stop, or at least taper back. Even as we spoke, I felt torn. A slight sinking in my gut. Was there something wrong with me? I know so many mothers who have bent over backward to have even a modest supply of breast milk, and here I am stopping just because I want to. Poor Nellie — only 5 weeks old, and here I am, her mama, plotting her nutritional abandonment.

I mentioned feeling particularly guilty about the loss of antibodies during a pandemic, and the lactation consultant told me that, in terms of immunity benefits, even just 1 to 2 ounces of breast milk per day is enough. It was a revelation! As we spoke, my heart grew lighter and lighter as I digested the idea of sharing the work of feeding our baby with other caregivers. My mom could feed her! My husband could feed her! The nanny could feed her! I knew that there was no guarantee that I’d be able to maintain a supply once I started to taper back, but I was OK with it. I decided to try to keep one feeding a day, and if my body wasn’t up for it, so be it.

We began the transition right away. There was a learning curve — buying bottles, picking a formula, figuring out how to mix it safely — but almost immediately I felt lighter, and almost instantly I got more sleep. My husband was back to work, and I was still on leave, but using formula meant that on really hard nights, I could tag him in on a whim — no pre-planning or pumping required. If I hit a wall, no biggie. I’d wake him up and simply say “tag” and go faceplant in bed, off duty in an instant. Formula felt like a safety net, and my anxiety lifted right along with my mood.

The weekend after we switched to formula, I took Griffin out for a day of errands and park stops — nothing particularly special or extraordinary, simply five hours of time together, just the two of us, while my husband stayed home with the baby. My son was transformed, and at the end of that day, both he and I were the most “ourselves” we’d been since his sister’s birth. From then on, both he and I loved Nellie a little more easily.

We are a different family than we were when our first child was born, and I’ve slowly accepted the fact that I’m a very different mom this time around, too.

Even if Nellie was hungry, formula meant it was easier to include my son in feedings. Griffin could go get a bottle, help mix the formula — pushing the button on a Baby Brezza is decently exciting, even for grown-ups. He could even hold the bottle and try to feed her “by my own self!” (with supervision!).

Now that I’m back to work, formula feeding means that I can just gather my things and go when the nanny arrives — no pumping required. I’m a freelance writer, so I don’t have an office. I work from coffee shops mostly, and having to come home to pump or nurse Nellie would be incredibly disruptive, and — with work hours that cost $24 per hour — expensive, too.

For our family, making the switch to formula has meant flexibility, agility, and — particularly for me — much-needed freedom. More is needed from me by more people, but I am still just one person. So, I’ve learned that caring for my own mental health is one of the best ways I can care for my kids. Letting go of breastfeeding this time created the breathing room I needed to be a more relaxed, more balanced mom and was absolutely worth it.

Nellie is 16 weeks old now. Healthy, strong, chubbier by the day. I love our single nursing session, which I do sometime in the 7 o’clock hour, in the quiet morning light before my son gets up. We snuggle up, tummy to tummy, and she nurses drowsily as I ease into the day. I don’t know how much milk she gets or how long we’ll have these sessions. I’m grateful it has lasted as long as it has. I’ll be OK with it when it ends. We are a different family than we were when our first child was born, and I’ve slowly accepted the fact that I’m a very different mom this time around, too.