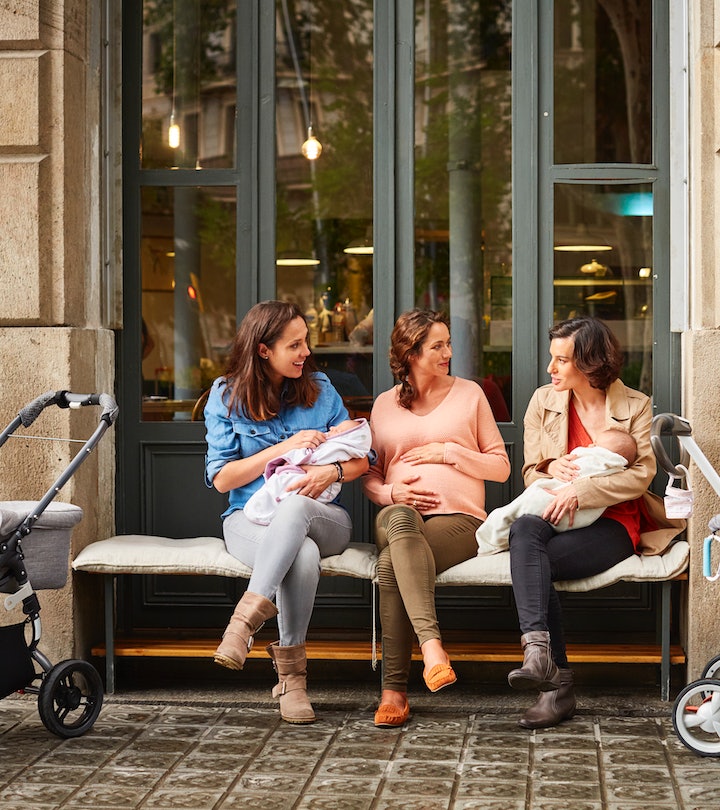 How To Handle It When Someone Criticizes Your Parenting

No matter how intentional and thoughtful you are in your parenting efforts, there's always someone who's got something to say about your skill set or your way of talking to your child. Maybe they think you’re too lenient, or that your kid has too much screen time — or even the fact that you cut the crusts off your child’s PB&J. Whatever it is that friends or family might be commenting on about your parenting — or how well-intentioned they may be — comments about the way your parent can feel downright cutting. Even a small comment made in passing hurts — it’s hard when someone criticizes your parenting. Here’s how to deal with the unsolicited advice once and for all.

Your toddler streaks past your mother-in-law, and she makes a curt comment about why they’re not potty trained yet, because all of her kids were trained before they turned 2. (Of course they were.) It’s not always easy to assess what’s true criticism from a little comment. But if a comment — however small — hurts, you should listen to that feeling says Gabrielle Benoit, a certified trauma professional. “Criticism may look or sound different to every individual — we experience it differently based on our own unique histories and triggers,” Benoit explains. “When criticism is camouflaged by love, it can be even harder to recognize or name.” That’s when you need to do what she calls a “gut check,” and see how you feel when something that is said about your parenting stings.

Sometimes, the criticism comes in a much more blatant form. “You might be told things like, ‘Why did you tell your kid that?’, ‘You don't make your kid ___?’, ‘Aren't you going to say something to your kid about that behavior?’, or ‘You are one of those (permissive, gentle, tiger mom etc.) parents aren't you?’” Therese Connolly, a psychotherapist and licensed clinical social worker explains to Romper. “These are all common examples parents may hear from others who disagree with their parenting style.” If you hear statements like this from someone you know, this is your cue that you’re being criticized.

Body language can demonstrate critique, too. “Criticism comes in so many forms, both overt and covert, and can be via language or nonverbal signs such as an eye roll, grunts or groans from anyone watching your parenting,” Connolly continues. “It can even come in much more subtle and nuanced forms, such as not inviting you and your kid to an event, having other parents avoid you and your kids if they don't like what you're doing.”

How to set boundaries when someone criticizes your parenting

Once you’ve identified the criticism, it’s time to set up a strategy so that it doesn’t continue. Because believe it or not, if you don’t stop it, not only can it get worse, but it might start making you doubt yourself as a parent — and that’s just unacceptable. “When handling unsolicited advice or criticism, it is best to handle it straight on,” Christina Runnels, a licensed professional counselor-supervisor, tells Romper. “Be firm in your responses and boundaries, because standing up for yourself and your own beliefs in front of your children is an opportunity for your children to learn to do this for themselves in their lives.”

Easier said than done, depending on who is doing the criticizing. After all, if a stranger in the food court questions why your kid is drinking juice instead of water, well, you never have to see that person again. But, if it’s an in-law or family member who’s raising an eyebrow about your kid’s bedtime, you’re going to have to rethink your strategy, David Tzall, a licensed psychologist says. “Boundaries are going to look different depending on who made the criticisms,” says Tzall. “With someone you know better, it is important to let them know the hurt it caused or the damage it has taken. Tzall suggests letting the person know that their comments aren’t appreciated, and you won’t stand by and let it continue to happen. “Setting such boundaries is necessary,” he says. “Setting boundaries can be easy, while continually reinforcing them can be challenging.”

Here’s what to say when someone criticizes your parenting

You’re this close to getting out of the store when your toddler asks for some candy at the counter. When you say no, they throw themselves on the ground in a full-blown tantrum. While you’re trying to pick your kid up off the floor while juggling with your groceries, a voice from behind you says, “You shouldn’t let them do that.” (Thanks, lady.) When someone criticizes your parenting, you’ve got to shut it down right away. “Utilize language that is very strong and concrete when responding to the criticism,” advises Runnels. “This may look like a statement like, ‘I understand your position, but I have not asked for your thoughts.’”

Here are some other things you can say when someone criticizes your parenting:

Once you’ve made your statement, your follow-up is also important. “After you make a verbal response, then if needed move physically away from the person letting them know (non-verbally) that you don't need their input and didn't ask for it,” adds Connolly. And above all, be clear on what you want to convey without asking for permission. “You state what you need or want directly, not saying, ‘Is that ok?’ at the end of your sentence,” she says. “You are not asking permission for what your values are, you are stating your values and that this is your choice/decision on how you parent your child.”

What to do if they won’t stop criticizing your parenting

Assuming that the offending comments came from someone you see somewhat on the regular (like a family member or friend), you should determine what your dealbreakers are. After all, ignoring the insults will only allow it to continue, says Runnels. “If individuals believe they can criticize you without you responding they will be more likely to do so,” she says. That’s why you need to be ready to make some serious decisions, because it will ultimately benefit you and your family. “If someone keeps pushing your parenting boundaries, it is time to enforce the consequence,” adds Benoit. “When we set boundaries, it is not just defining acceptable behavior, but also a consequence for if (and when) the boundaries are violated.” For example, you might limit conversations with that person, or have fewer visits so that you don’t have to deal with the digs.

And then, you might have to do something more drastic. “If the criticism doesn’t stop you should distance yourself from the person that is criticizing you,” says Runnels. “Remember that you have your own style of parenting and as long as it is ethical, legal and edifying to your children, it does not need to be validated by anyone.”

It’s sad when people think that they can say whatever they want about your parenting and call it constructive when it’s just cutting. Know what your boundaries are and be sure to enforce them. Because it’s not just for your own self-esteem, but your kids are watching, too, and they need to learn what’s acceptable — and what isn’t.

More Like This
30 Great Non-Toy Gift Ideas For Kids
20 Fun Elf On The Shelf Arrival Ideas
Baby Growth Spurts: When They Happen & What To Expect
When To Stop Swaddling Your Baby: 8 Signs It’s Time To Transition