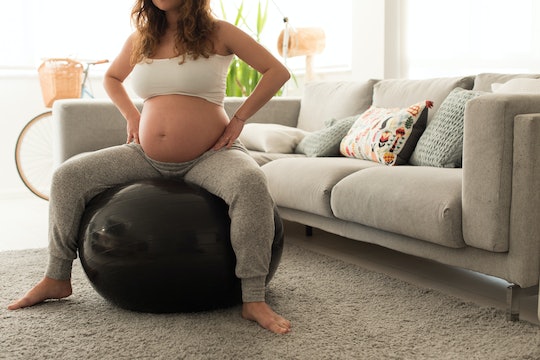 Does Baby Kick During Contractions? Here’s What You Can Expect

No need to panic.

At first, they feel like little wispy butterfly wings flying around in your belly. As your pregnancy progresses, though, those little flutterings turn into full-on kicks to your ribs or lungs. And while they might happen at rather inopportune times (like, say, at 4:00 a.m.), you might be most surprised of all to notice that your baby is extra wriggly and full of kicks during contractions.

When you’re in the throes of labor, you’ll probably have an electronic fetal monitor attached to your belly. This machine, What To Expect reported, helps the medical staff monitor your baby’s heartbeat in response to your contractions. So if you have an eye-crossing contraction, you might get worried if your baby begins kicking a lot, but you shouldn’t. "It is normal and an expected sign of well-being that the fetus kicks during labor,” Kathy Fray, a bestselling author, senior midwife, and maternity consultant told Romper.

If you feel a ramped up amount of Rockette action during a contraction, here are some reasons why.

Your Baby Is Awake

You’re not asleep during labor, so why should your baby be? That’s not to say that your baby will be awake during the entire labor and delivery, though. Fray explains that babies in the womb typically have 40-minute sleep cycles of being asleep, awake, and falling back to sleep again. And if they’re awake, they might give you a kick or two, possibly during or after a contraction. But realistically, your baby just might be kicking as much as they would on a normal day. “Your baby’s movements will most likely be unchanged during labor as long as there is adequate blood supply to the baby,” OB/GYN Dr. Kim Langdon, MD, tells Romper.

Your Baby Is Bored

Sure, you might be super busy (and welp, in a lot of pain), but your baby is just hanging out in there, looking for something to do. So if you’re wondering why you might feel a random kick, Fray says, "Well, who the heck can lie perfectly still for 9 months?" She explains that kicking "is also part of them developing muscle strength and coordination." According to Fray, kicking is also a way for your baby to start showing their personality. It's a way for them to express their likes, dislikes, acknowledge a sound or sensation or temperature. That’s why if your hospital room is kind of on the cold side, a swift kick to the ribs might be one way your baby is showing their displeasure.

Your Baby Is In Distress

This is the possibility that worries most moms-to-be. You might panic, thinking that a kick means that your baby is in pain from the contraction, or is in some sort of distress. And while it’s not common, they just might be, Dr. Langdon says. “If your baby is extra bouncy or wiggling, it may mean nothing unless this movement is extreme,” says Dr. Langdon. “Extreme movement can be a sign the baby is struggling in some way such as a compressed umbilical cord.” That’s why you should always communicate to a medical professional if you feel that your baby’s movements are erratic or not like their normal kicks.

Your Baby Is Getting Ready For Birth

If you thought that you were the only one prepped and ready for labor, think again. Your baby is also getting in on the big moment by preparing to be born. While some moms may feel their baby kick during contractions, Fray says that some babies "can get especially wriggly during the birth pushing phase, as they flexion their head ready for birth and line up their spine to the anterior position."

Because, believe it or not, your baby knows exactly what’s going on outside the womb. In the study, “Fetal movement during labor,” researchers surveyed 22 women who had gone through labor and delivery. They found that a staggering 89.8% of uterine contractions also had fetal movement, with researchers concluding that there is a direct link showing that babies move during contractions.

But if you’re having Braxton Hicks contractions (the ones that are the prequel to actual labor), your baby might not move as much. “Braxton Hicks (i.e. false labor) are usually less intense and do not lead to problems such as fetal distress or cervical dilation,” explains Dr. Langdon. And since the contractions aren’t as severe, your baby’s response won’t be as strong, either.

Imagine you’re taking the most deliciously warm bath for nine months. All of your needs are met; you’re never hungry and you can snooze whenever you want. Then all of a sudden, someone pulls the plug and unceremoniously drains all the water. Not only that, but the tub you’re in keeps getting smaller and is squeezing you. You’d probably be pretty pissed off, too, which is why your baby might also give some kicks during contractions. “Some babies do kick during actual contractions and some kick more in between,” says Fray. But it’s equally important to remember that: "active regular movements are an important sign of fetal well-being," says Fray, and there is nothing wrong with movement at any time.

If your baby is kicking during contractions, it’s probably a sign that your little one is wide awake and healthy. Again, if any of your baby’s. movements are cause for concern, tell your OB/GYN or midwife immediately. But for the most part, if you feel a kick, just know that it’s your baby cheering you on from the inside until they’re born.

More Like This
Can Swimming Induce Labor? Experts Weigh In
This Is How Your Water Breaks During A C-Section
What You Need To Know About Eating Burrata During Pregnancy
Should You Bring Your Breast Pump To The Hospital? Here's The Deal

This article was originally published on Sep. 6, 2018