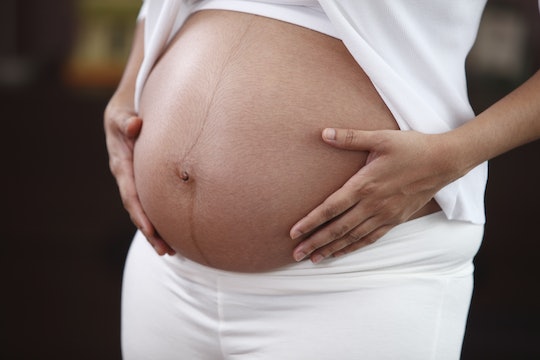 This Is When Your Belly Button Might Pop Out During Pregnancy

Thing is, you never really know when (or even if) your belly button will pop out at all. “Due to the expanding nature of the belly during pregnancy, your belly button can pop out,” Dr. Kiarra King, MD, FACOG, an OB/GYN, tells Romper in a phone interview. “It doesn’t happen for every mom, though.” So don’t freak out if all your preggo mom friends have outies and yours still points inward; it doesn’t mean that there’s anything wrong with your baby or your belly. It’s just that every momma’s body (and every pregnancy, really) are all unique and beautiful in their own way.

But if your belly button protrudes prominently, here’s what you need to know.

Here’s Why Your Belly Button Pops Out During Pregnancy

If you thought that your belly button would pop out during the first few weeks of gestation, guess again. If you are going to develop an “outie” pregnant belly button, then it will most likely happen later on in the pregnancy. “Because of the increase in abdominal pressure due to the enlarging uterus, the belly button can be pushed out. Not all women will develop this, but typically this occurs in the 2nd and 3rd trimesters,” Jennie Mao M.D., medical director of the UW Medicine Women’s Clinic at Harborview Medical Center, tells Romper via email.

Generally, about 20 weeks in is when the pregnancy belly button will pop out, says Dr. Kecia Gaither, MD, MPH, FACOG, double board-certified in OB/GYN and Maternal Fetal Medicine, Director of Perinatal Services at NYC Health + Hospitals/Lincoln. “The uterus by that time has ascended out of the pelvic cavity — from behind the pelvic bones, and is now in the abdominal cavity — there are no bony structures in front of it — so it protrudes.” From about the halfway point of your pregnancy onward, there just isn’t much keeping that belly button in place, so it can become more prominent. It may not be the biggest change to your pregnant body, but it’s definitely something out of the ordinary for many people.

Will Your Belly Button Popping Out During Pregnancy Hurt?

Although it might sound pretty painful, you probably won't experience any seriously bad side effects if your belly button pops out. Some people experience a bit of discomfort in the naval area, but it does not appear that the process of popping is painful in and of itself, according to Healthline. In addition, some people may find the pregnant belly button more sensitive to touch or itchy, but these issues typically resolve once the baby is delivered, says Dr. Mao.

Thing is, if you find that your new outie is getting irritated from contact with clothes during the day, then take a cue from New Kids Center and put a band-aid over your navel for the time being. Using a belly button cover or tummy sleeve specifically designed for pregnant people may help with this irritation as well. But think twice before you break out the tape, though. “It’s not advisable to try and tape the belly button down,” says Dr. King. “Especially with a pregnant mom, you might have a reaction, like dermatitis, to the tape that you’re using.”

While your pregnant belly might be even more awesome with an outie, it could be a sign of something more problematic, warns Dr. Jones. “That area is a weak area. So whenever the abdomen stretches, sometimes you'll have that hernia formation occur,” says Dr. Jones. That condition, commonly known as an umbilical hernia or diastasis recti abdominis(DRA), is when there is a separation of the rectus abdominis muscles along the linea alba, a study in the National Library of Medicine explained. Typically, it occurs during pregnancy and the first few weeks after delivery, although the study found that DRA can even be common at six months postpartum.

So how do you know if you’re more prone to getting an umbilical hernia? “Patients who have had multiple pregnancies are going to be at higher risk,” explains Dr. Jones. “Based on their prior pregnancies and that prior stretching on the umbilicus or the belly button, they're more likely to have pain in that area from the stretching.” Typically, a laparoscopic hernia surgery can be performed to repair the hernia, the American College of Surgeons reported.

Will Your Belly Button Pop Out If It’s An Innie?

But let’s say that your belly button is an innie. Will it suddenly become an outie? Probably not, says Dr. Jones. “For patients that have belly buttons that some call ‘innies’ or ‘outies’, typically if you have a belly button that projects inward, even with the stretching of the abdomen, you typically won't have it projected outward, in terms of the belly button itself,” she says. Now, that doesn’t mean that it might not pop out at some point (especially as you get farther along in your pregnancy). But for the most part, if you have an innie, expect it to stay that way for much — if not all — of your pregnancy.

Does A Popped Out Belly Button Stay That Way After Pregnancy?

Although you might have come to embrace your popped out belly button, chances are, it’s not here to stay. “Most of the time, what you'll find is after delivery, once the abdomen starts to shrink back down to a normal size uterus, those areas will go back to where they were before,” says Dr. Jones. Of course, if you do have an umbilical hernia, your outie might stay. So if your belly button still points outwards well into your postpartum period, you might want to have your OB/GYN check it so that you can know if it’s a hernia in need of repair or not.

A popped out belly button is such a common occurrence during pregnancy. While it might elicit some oohs and aahs from friends and family, speak with your doctor if you’re concerned that it could potentially be an umbilical hernia. And in the meantime, embrace your endearing outie as just another precious (but fleeting) part of your pregnancy.

More Like This
When Does Pregnancy Horniness Kick In?
This Is What Experts Say About Eating Hot Dogs During Pregnancy
Barre Could Be The Low-Impact Prenatal Workout You Need
Can Babies Hear Fireworks In The Womb? Here's What Experts Say

This article was originally published on Oct. 17, 2016