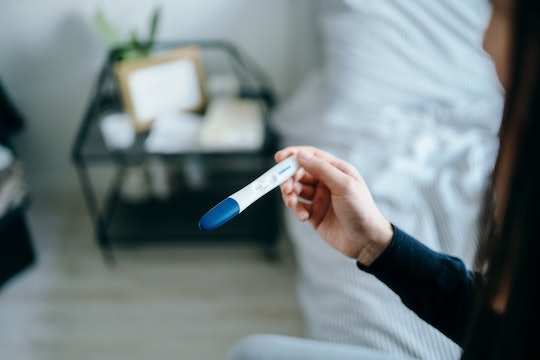 Here's What A Faint Line On A Pregnancy Test Actually Means

So many shades of blue.

You pee on a test and wait. And when that first line begins to emerge in the window, your eyes can go all screwy trying to analyze the results. Are there two little lines really there? Once you get over the giddiness, you might look twice at those lines, especially if they’re on the light side, and wonder: when should pregnancy test results get darker?

It's hard not to freak out about faint lines. After all, when you take a pregnancy test, you want the results to be bright and unabashedly bold, so that there’s no denying that you’re expecting. “With easy access to home pregnancy tests, many women turn to them to find out if they are pregnant before contacting their maternity care provider,” Dr. Lauren Demosthenes, MD, an OB/GYN and Senior Medical Director with Babyscripts tells Romper in an email. “Most home pregnancy tests will be positive between 7 and 10 days after conception, so even before you miss a menstrual period.”

Thing is, just because you can test super early doesn’t mean that you should. Light lines on a pregnancy test can mean a variety of things; some good, some, well, not. So if you’re asking yourself when pregnancy test lines are supposed to get darker, here’s what you need to know.

Pregnancy Test Results Depend On How Soon You Take Them

Pregnancy tests measure the amount of human chorionic gonadotropin (or hCG to you and me) that you have in your urine, Hormone.org reported. Made by the cells that surround the embryo, hCG can be present in your body just seven days after the egg has been fertilized. But if you’re newly pregnant, the lines on your test might be a little light, says Dr. John Zhang, MD, a fertility expert. “Generally speaking, the shade of the lines reflect the hCG level,” explains Dr. Zhang. “If compared with the very early stage of pregnancy, nine weeks line can be darker.” That means you might get a much different (and darker) result if you test even a week or two after your initial test.

Research supports this theory. In the study “Strips of Hope: Accuracy of Home Pregnancy Tests and New Developments,” researchers found that detecting pregnancy eight days prior to your period is “unrealistic”. That’s why it’s better to sometimes wait (even though it can feel like an eternity) in order to get the right result the first time around.

It's Best To Take A Pregnancy Test Early In The Morning

The time of day you take your test can make a big difference in how your results appear. That’s why you should always use the premium pee (i.e., the one first thing in the morning) to get the most accurate results. “You should test your first morning urine when your urine is most concentrated,” Dr. Demosthenes says, adding, “avoid drinking large quantities of fluids beforehand which can dilute out the HCG in the urine.” Dr. Langdon agrees, stating: “If you are super hydrated, it might affect the darkness,” she says. “It might be lighter in those cases.”

When You’ve Already Had One Positive Test Result

Who hasn’t taken an extra test (or twelve) to make absolutely positively sure that you’re expecting? Well, if you’ve already taken one test and gotten two darkish lines, it’s probably safe to assume you’re pregnant. So while taking a subsequent test can allay your fears, it might not be necessary, OB/GYN Dr. Kim Langdon, MD, tells Romper.

“Once they are dark, then the degree of darkness should stay the same regardless of gestation,” she says.

When Your Test Result Is As Dark As The Control Line

When it comes to the hue of your test results, you might wonder what’s light, and what’s just right. If you’re going cross-eyed staring at the lines, it’s good to have a gauge to know what exactly is the right shade of positive. “It should be as dark as the control line,” advises Dr. Langdon. “Otherwise, if it is faint or light, it could mean that you are a bit too early for testing or that it is a chemical pregnancy.” A chemical pregnancy is when a fertilized egg doesn’t implant in the uterus, What To Expect reported, and is classified as an early-stage pregnancy loss. “If the line turns from darker to lighter, it could indicate this pregnancy is not viable,” says Dr. Zhang.

When You Read It At The Right Time The First Time

Raise your hand if you’ve fished a pregnancy test out of the wastepaper basket hoping for a different (positive) result. And while a dark line on a pregnancy test means high hCG levels, be careful if you’re reading the results hours or even days later, advises Dr. Demosthenes. “If you test and your test is negative, you may look at your test later and think that you see a positive line,” she explains. “This is simply due to your urine evaporating and is not a positive test.” That’s why you should read the results when your product recommends and then toss the test in the trash to avoid confusion — and false hopes.

For the most part, pregnancy tests don’t get darker as they go along. “These tests are designed to be read usually within 10 minutes of you doing the test,” says Dr. Demosthenes. “The instructions in your test will give you specific information as to how long the test should be exposed to your urine and at what number of minutes it will be positive.” If there’s a faint line on the pregnancy test but it’s not getting darker, you should try testing again in a few days. “It’s recommended [for patients] to follow up with their OB/GYN to have blood tests and ultrasound accordingly,” says Dr. Zhang. Then you’ll know if the results you’re reading are right, and if you need to get cracking on that nursery.

More Like This
How To Talk To Your Partner About Wanting A Baby
Considering Getting A Tattoo While Pregnant? Here’s What To Know
22 Summer-Inspired Names For Your Totally Laid-Back Baby Boy
21 Roman Baby Boy Names With Ancient Appeal

This article was originally published on May 31, 2017