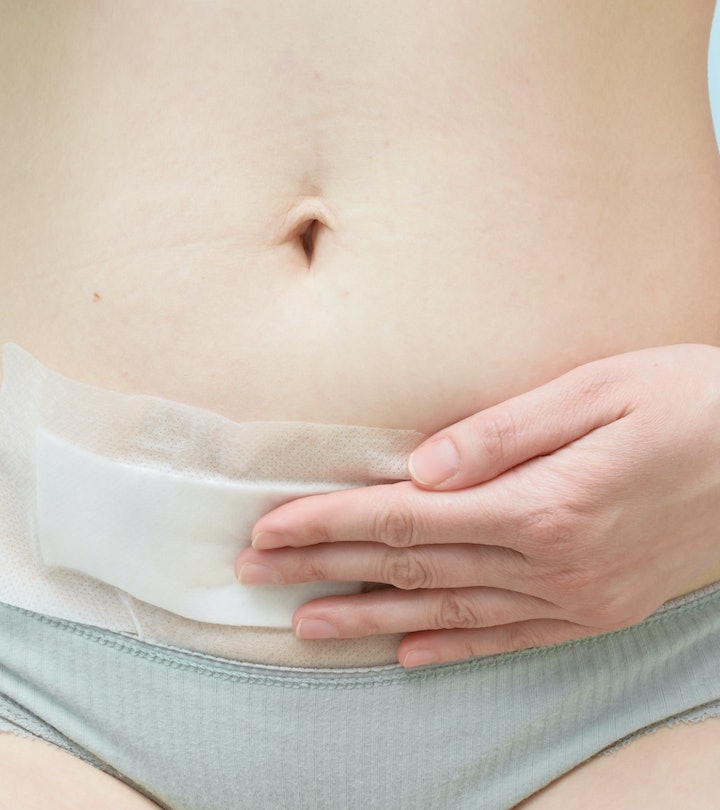 Here's The Best Time To Remove Your C-Section Tape

After you deliver your baby via cesarean section, there’s a whole lot of stitching/suturing/stapling and taping going on to help heal your incision. But once you get home, you might start looking at that tape and wondering when it can come off. Perhaps you want to take a peek at your incision scar or ensure that everything is healing as it should as part of your overall recovery process. Knowing when to remove the tape after a C-section is important to keeping both you and your incision safe, though, so here’s what you need to know about touching that tape.

When to remove surgical tape after a C-section

There are a lot of different dressings you might get after having a C-section, so before you start fiddling with them, you need to know which ones your doctor has used. And the first one that is used immediately after your surgery should always be left on — and alone. “Silk tape and paper tape are commonly used to keep the bandage on the incision immediately after a cesarean section,” Dr. Megan Gray, M.D., an OB-GYN at Orlando Health Physician Associates tells Romper. “Many times, the tape is used to create pressure against the incision to reduce the incidence of oozing from the skin edges along incision.”

Once you’re ready to leave the hospital, your doctor will change the bandages and use surgical tape (such as Steri Strips or Dermabond) to protect and let your incision heal while you’re at home. Of course, it’s understandable that you might want to tease off the tape. A PubMed study found that postpartum women who were allowed to remove their wound dressings earlier so that they could shower were significantly happier than those who were still stuck wearing the surgical tape.

But when can you start teasing the tape off your skin? Well, that depends on the type of tape used as well as how your recovery is going, Dr. CherubaPrabakar, M.D., an OB-GYN, explains to Romper. “Usually it’s okay to try to take the tape off after one week,” says Prabakar. “If you have staples, your doctor might put 4 x 4 abdominal pad on the wound, and that should be in place for a week to 10 days.”

Dr. Greg Marchand, M.D., an OB-GYN, says that it’s best to hold off removing surgical tape after a C-section if at all possible. “There are no dressings where a patient who has had a cesarean section needs to remove something in the first week,” he says. “The surgical tape is meant to sit and let healing occur, so don’t do any peeking at your incision until your post-op doctor’s visit.”

How to safely remove surgical tape after a C-section

Even though you might be ready to tear off the tape, your body (and in particular, your incision site) might not be. That’s why the experts agree that it’s best to let your surgical tape take its time in coming off all on its own and resume your normal activities (like showering) if you’re up to it. “Most dressings are fine to shower with,” says Prabakar. “If it gets wet it’s not a big deal.”

Still, you might be getting antsy to strip the surgical tape. If you’re going to remove it at home, you’d better be prepared for the possibility of some pain or even ripping some skin off. “Tape can be uncomfortable to remove,” says Gray. “Think of it as the largest most adhesive Band-Aid you could ever remove, like waxing on steroids.” There are solutions that can be applied to the tape to inactivate some of the adhesiveness of the tape and make it easier to remove, according to Gray, but it might be best to leave it on until it starts to fall off on its own, or let the nursing staff help to remove the bandage.

What happens if the surgical tape falls off early?

Let’s say that your surgical tape has started to separate from the skin, and you want to finish the job and pull off the rest. It’s best to proceed with caution, though. “Although it’s best not to touch it at all, if your surgical tape starts to come off, it’s good to know that it functions like a sticker,” explains Prabakar. “Even if it comes off a little bit, it can still stick, so try to reapply it until it’s really ready to come off.”

For the most part, your C-section incision should heal just fine with the surgical tape acting as a protection for your incision. Still, there are times when you might need to schedule an appointment with your OB-GYN about your C-section tape. “If you’re having discomfort or if there is damage to the skin underlying the tape, you should speak to your doctor,” says Gray. Adds Prabakar: “Removing the bandage won’t increase your chances for infection, unless you’re obese, have diabetes, or had a bacterial infection during delivery, such as chorioamnionitis,” she says. If you’re having pain, a fever, or redness, make an appointment with your doctor.

If you absolutely can’t stand the surgical tape and want it off already, try not to touch it. It’s meant to protect your wound from your pants or undies rubbing against it, and it should stay in place while your skin underneath heals. When your body has healed, it will either fall off all on its own, or you can go to the doctor for its safe removal.

More Like This
Can The Way You Sleep Really Turn A Breech Baby?
All The Reasons Why You Might Have A C-Section
Everything You Need To Know About Postpartum Blood Clots
Breaking Down The Different Types Of Postpartum Infections