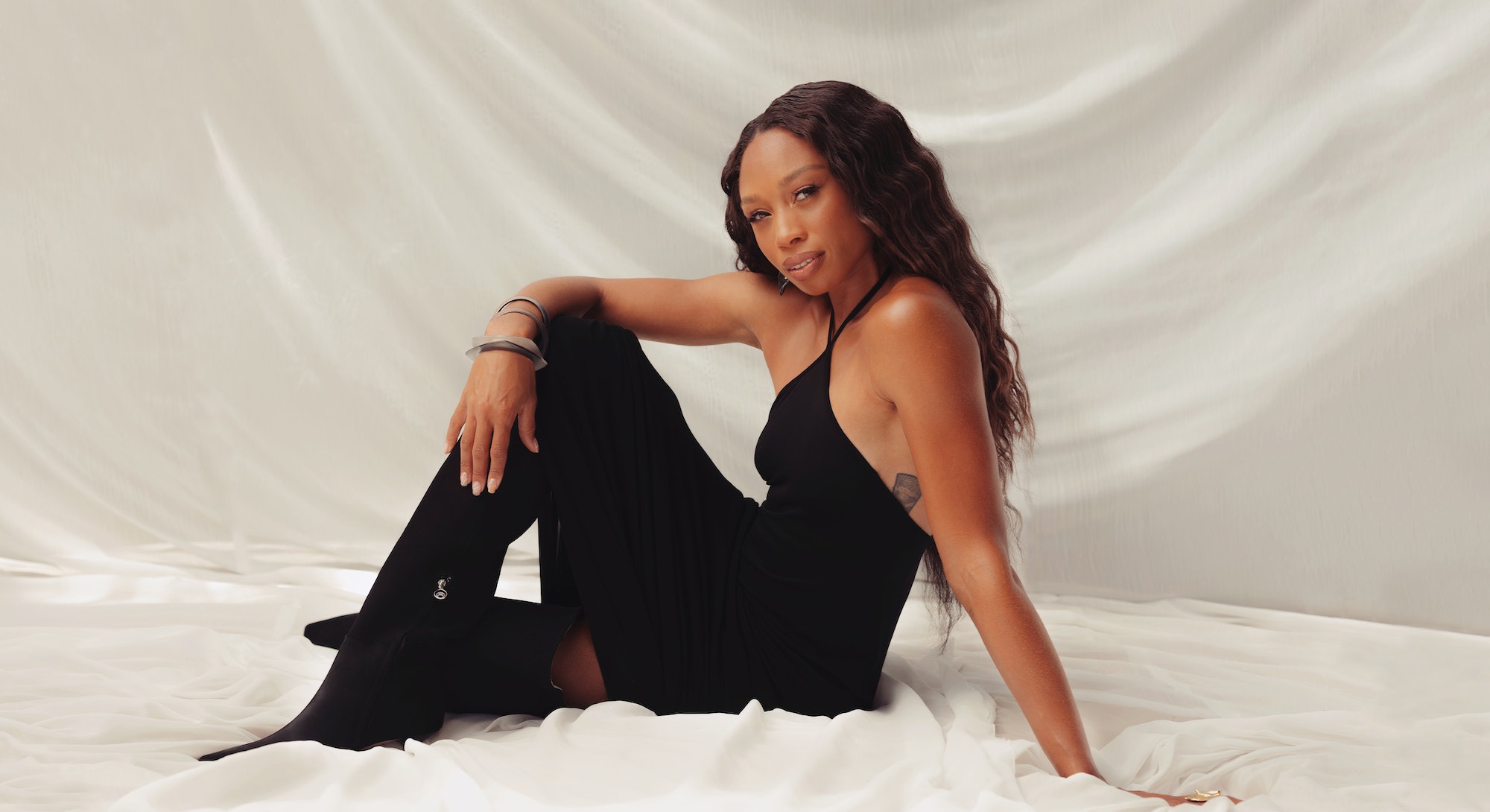 The five-time Olympian finds the sweet spot between big dreams and daily to-dos.

by Jordan Ligons
Aug. 10, 2022
Sponsored
The Back To School Issue

There’s something about Allyson Felix that’s so mesmerizing. Maybe it’s the rare air she breathes as the most decorated U.S. track and field athlete — ever — with 11 Olympic medals. Maybe it’s the way Felix, who first returned to competition when her daughter, Camryn, was just 8 months old, has repeatedly proven that “mother” and “athlete” are not mutually exclusive. (Camryn joined Felix at the 2021 USA Golden Games in a toddler-size shirt that read “My mom is faster than your mom.” It’s the truth, we can’t deny it.) Maybe it’s Felix’s necklace of gold Olympic rings shining through this virtual video chat, almost as bright as her smile.

At the time of our call, it’s been 13 days since she ran her last competitive race at the World Athletics Championships in Oregon and retired from track and field. And it’s been five days since she unretired, went back to Oregon, and assisted Team USA in winning the 4x400-meter relay preliminary race. She then re-retired.

And if her coach calls in another favor?

“I’m not coming back,” Felix, 36, says, laughing. Cheat meals have been abundant, her phone thriving on silent. Retirement looks good on her.

Though Felix may be hanging up her spikes for real this time, there’s still plenty to keep her busy. Camryn, 3, is “priority No. 1.” “Whether that’s clearing a day, clearing a weekend, volunteering in her classroom, or picking up or dropping off at school, I want to be in her life in the biggest way,” she says. “But it is hard to balance it. Sometimes you sacrifice some things, and I think that’s OK. When you’re trying to do something and it’s that important to you, that’s necessary.”

As we head back to school, Romper talked to the five-time Olympian about how she sets goals on and off the track. Because we could all use a bit of Felix’s expertise in this season of fresh starts and new challenges. She shared the advice she’s taking for a balanced work-home life and how she uses her voice to speak out, even when it scares her.

Break It Down Into Smaller Goals

Whether it was shaving off milliseconds in the 200-meter race, teaching Camryn the alphabet sounds, or starting her performance footwear company, Saysh, Felix’s accomplishments started as much smaller, more attainable goals.

“It can feel overwhelming to think about the Olympic Games that are four years away,” she says.

“I love to just break it down because I feel like once you make it small, then you start to have those small wins and they become bigger. Before you know it, I’m like, ‘Wow, I’m going after this thing that felt really big, but now it’s manageable.’” To keep up motivation, it helps to find the sweet spot between your big dreams and your daily to-dos, she says — and to see the silver lining in setbacks.

When Felix’s second Olympic appearance resulted in a second silver medal, she says, “I was devastated. It felt like something that wasn’t in the plan. But in the end, it was because it allowed me to be better. It allowed me to stretch myself. I feel like so much character was developed in those moments because it really tested me and required that strength and perseverance to continue on.”

At her next Olympics, London 2012, she medaled three times — all gold.

Use Your Voice, Even If It Shakes

When it comes to goals that are so big they’re scary, Felix leans on something her brother said to her when she was recovering from Camryn’s birth. She’d had a complicated pregnancy — life-threatening preeclampsia required an emergency C-section at 32 weeks — and her daughter had to spend a month in the NICU. While she was in this vulnerable phase, she says, her sponsor Nike attempted to cut 70% of her pay in a new contract and pressured her to return to competition quickly. Her brother told her: Use your voice, even if it shakes.

“It resonated with me because I had so much fear, and I had never been that person that was comfortable speaking out; I was always a private person, so when I thought about sharing what was happening with me, it just seems so far outside of who I was,” Felix says now. “[He] made me feel like I can do this, even if I’m scared. I can still move forward.”

“You don’t have to choose between motherhood and anything else.”

Felix knew she was speaking out for herself and for all the athletes who would come after her. A few months after she published an op-ed in the New York Times, Nike updated its policy to guarantee pay and bonuses for 18 months around pregnancy. Felix, meanwhile, signed with Athleta and created her own women’s lifestyle brand, Saysh, which launched a few weeks before the Tokyo Olympics last year. (Felix won two Olympic medals in a pair of Saysh Spike Ones, the first track athlete to win a race in her own shoe brand.) Last December, she participated in the White House’s first Maternal Health Call to Action Summit, and in 2019, she testified before Congress about the racial disparities in maternal mortality.

“I realized on the other side of that fear is this incredible freedom,” she says. “I can have an opinion on things; I can stand up for people whose voice may not be as loud.” Saysh, for example, has a genius way of standing with mothers: If you buy the brand’s shoes and during pregnancy your foot changes size, it’ll send you a new, free pair. “To be able to say, ‘You don’t have to choose between motherhood and anything else,’” Felix explains, “is a small thing that you can do for women and to be able to show up for them in that way.”

Felix is a big champion of small changes. “It doesn’t have to be this perfect scenario to be able to have a loud voice,” she says. “You can be scared just like me and move forward. You can also start small; you don’t have to yell from the rooftops. Sometimes we feel ‘I have to shake everything up to make change or have impact,’ and I don’t think that that’s always necessary.”

Think Hard About What Matters Most

In this new season of Felix’s career and life, if it’s not a “hell yes,” it’s a “no,” a mindset shift that she says happened after the ordeal with Nike. “If it wasn’t going to have an impact, if I can’t be hands-on, if it’s not work that I can be proud of, then it’s not something that serves me,” she says. A couple things that made the cut: a partnership with Voice in Sport, a global digital platform dedicated to girls and women in athletics, and spearheading the Power of She Fund, a child care grant program created with Athleta and the Women’s Sports Foundation.

As any parent knows, time is precious. But once you are dialed into what matters most, it’s amazing what you can find time for. At her last race at the World Athletics Championships in July, Felix worked with her partners to make sure there was free, accessible child care available for athletes, coaches, and officials. “I’m really grateful to have resources to bring help along, but there are so many athletes who don’t,” Felix said. “I wanted a way to better support women so that they have some of their best performances after they become mothers.”

Lean On Your Support System

When thinking of goals around motherhood, Felix lets out a sigh. “Man, I think those goals probably challenged me more than anything,” she says. There’s always another parenting project to throw yourself into — sleep training, potty training, and patience cultivation, to name a few that have kept Felix up. It’s easy to lose track of how all those “shoulds” relate to your family’s values. “I want to help Cammy to be well rounded and to be confident,” she says. “That’s the end goal, so those smaller goals — whether they’re focused on me and my parenting, or if they’re focused on things I’m trying to give her — [need to] all go back to that.”

Her current goals, though? Giving herself some grace on the days she can’t get to everything. Being better at leaning on others. “I don’t know why that’s hard for me,” she says. “I want to do everything myself, but realizing there are people who want to help and who love me. It’s OK to say that I need help.”

Raising Cammy is a team sport, she says, and her husband, Kenneth, has been a top-tier co-captain. He’s stepped up when work has taken her thousands of miles away or even when she’s home and just needs a nap. “It’s really nice to know that I’m not in this alone,” Felix said. “There are people who are helping me accomplish the same goals.”

Felix recognizes the weight of gold. It’s heavy, shiny, and all eyes are on it all the time. But what you do with that platform, well, that’s up to you. Asked about the achievement that meant the most to her, she talks about last year in Tokyo. “Making it back to the Olympics as a mother, after going through all of the things, I just felt so proud because, for the first time, it wasn’t necessarily about the clock or the medals or any of that. It was more about being a representation,” she says. “Being out there was saying that mothers can have amazing performances across the board, whatever industry you’re in. No one can put limits on you.”